Who Gets to Call it History?

Director Piotr Szkopiak on the set of The Last Witness

History is written by the victors and those with power. Significant events in the lives of ordinary citizens often go missing from news reports, calendars, and textbooks. But May 11th, 2018 was a monumental date. The Last Witness, Polish-Anglo writer and director Piotr Szkopiak’s second film, opened in Poland that day. Red carpet arrivals and press coverage mattered little compared to the importance of Szkopiak’s mother being present to watch the film.

For her, seeing a movie about the Katyn Massacre was public vindication. After years of international cover up from British, American, and Russian governments, mass audiences from Poland and the rest of the world get to learn about the tragedy during which 22,000 Poles were murdered by Soviet soldiers in 1940. That momentus reality was not lost on Piotr. “I’m dealing with historical facts. Not only that, I’m dealing with family history,” Szkopiak confessed to me during an interview. “The responsibility I feel is huge.” His sense of duty makes The Last Witness a declaration against injustice on behalf of his mother and the Polish people.

It’s been almost two decades since Piotr Szkopiak’s last film, Small Time Obsession (1999). He credits directorial duties on some of the UK’s top TV dramas, including Doctors and EastEnders, for giving him the tools to get back on the big screen. “TV was the film school I never had. You’re working with new scripts, new actors everyday. It’s the best film school because you’re also working to deadlines,” he said. “Everything I learned in TV I applied to The Last Witness.” His experience helped Szkopiak make a tight thriller that’s as intimate as it is nail-biting.

The story at core of The Last Witness is a journey of discovery. Alex Pettyfer (Elvis & Nixon, Magic Mike) plays Stephen Underwood, a British journalist investigating several apparent suicides in 1947 England. He soon learns the deaths are murders designed to prevent anyone from speaking out about war crimes perpetrated by the Soviet Union under Joseph Stalin. Allies’ official word was that the Nazis were responsible for mass graves of Poles found in and near Russia’s Katyn Forest. Stalin, British Prime Minister Winston Churchill, and US President Franklin Roosevelt argued that acknowledging Russian responsibility for the Katyn Massacre would compromise Soviet leadership in post-war Europe.

Poland’s central geographic positioning between Germany and Russia meant that it was crucial to building the Soviet Bloc that ran north to Estonia, south to Albania, and east to Berlin. Being a casualty of war was nothing new for Poland, however. It’s borders were changed, at one point even being wiped off the map, several times since 1000 AD. Political and psychological damage caused by the Katyn Massacre compounded centuries of genocidal scars and family wounds. The Last Witness contributes to this historical conversation with one of its central questions: What does it mean to identify as Polish?

Questions of identity go hand in hand with miseducation. Most citizens in England never knew the truth and felt increasing tensions when large numbers of Poles migrated to the UK during and after World War II. But Piotr had personal knowledge of the truth: “My mother lived with it all her life. It’s the reason why she stayed in England. The Poles wanted to go back to Poland, but my mother would not go back to a country which was still being occupied by the Soviet Union,” he revealed. “That’s the same Soviet Union that deported her to Siberia, leaving her family for dead.”

Alex Pettyfer as Journalist Stephen Underwood in The Last Witness

The Katyn Massacre often gets overlooked because history is recorded in statistics. The 22,000 Poles killed during the Katyn Massacre pales in comparison to the estimated 6 million Jews murdered during the Holocaust. Rather than compare them in importance, we can use both events as teaching tools to understand moments of our shared global past that help explain current events. “A lot of people don’t know why the Poles are in [England],” Piotr reminded me. “We’re having this issue with Brexit, but the whole postwar generation here in England was full of political refugees, rather than economic migrants.”

Piotr notes that these political realities make The Last Witness relevant in 2018 as tensions between the United States and Russia flare once again: “Poles understand Russians maybe more than Europeans and Americans understand Russians. The leaders of Russia always play to their home crowd. Just like Trump’s call to ‘Make America Great Again,’ Putin did exactly the same thing.” Facades of strength are part of Russian patriotism dating back to 18th Century reforms of Peter the Great. Strong-arming the truth has become common practice. 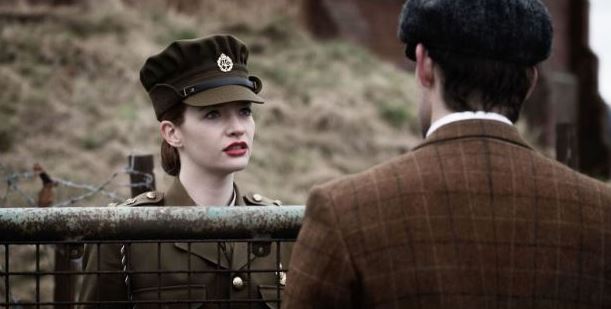 Talulah Riley as Jeanette Mitchell in The Last Witness

The Last Witness can help American citizens frame abstract foreign relations with Russia, as well as recent controversies in the New York City area. The same day that the film premiered in Poland, a resolution was brokered declaring that The Katyn Monument in Jersey City, New Jersey would only be moved about 200 feet from its original location. The monument commemorating the massacre was erected on a plaza set against the Manhattan skyline to signal its historical importance. So senators in Poland demonized a move which would lessen the statue’s public profile.

The events in Jersey City are the latest in a three decade re-evaluation of Katyn. Soviet President Mikhail Gorbachev finally acknowledged Russian responsibility in 1990, one year after the Berlin Wall fell. But it wasn’t until 2010 that the Russian state officially laid blame on Joseph Stalin. The United States owned complicity in the cover up in 2012. Governmental recognition was crucial for justice. But what did it mean in the lives of ordinary Polish citizens.

Michael Gambon as Frank Hamilton in The Last Witness

“The best reaction I had to the script while I was writing it was people would read it and then say, ‘Is this real?’ I would explain that it was real and it was a big surprise to them,” Piotr recalls. He believes in sharing the truth and letting people experience history on their own terms. As his mother and the others with first-hand memories of Katyn age, they’ll have this movie to tell their story: “This is why films like ‘The Last Witness’ are important, just to remind people what you’re dealing with. Just so they remember what happened.”