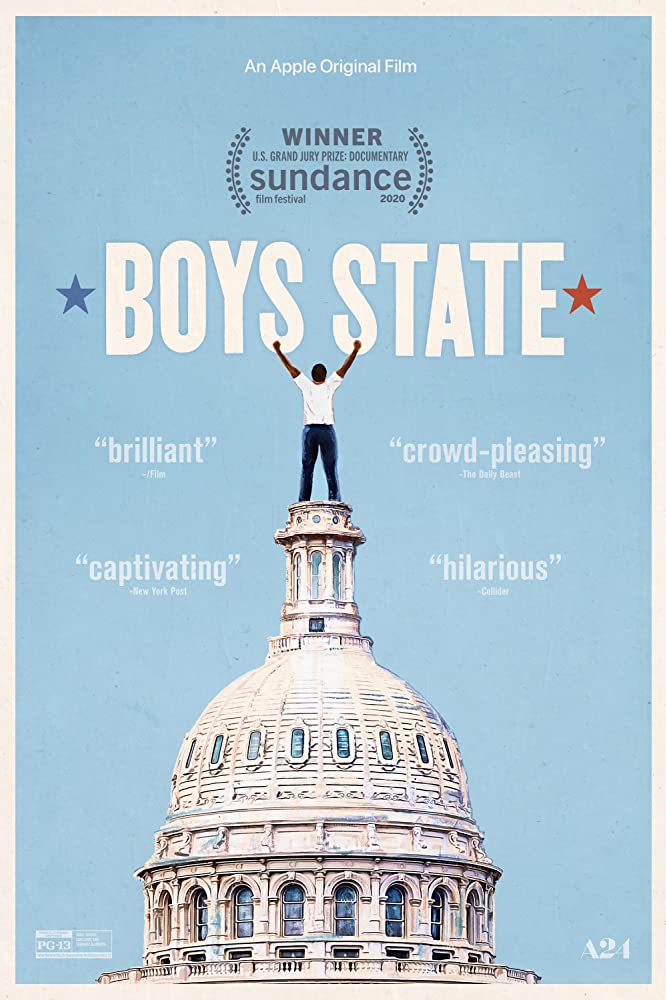 Every year, in each individual state, an event happens that gathers 1100 adolescent boys to participate in tradition called Boys State. The American Legion sponsored program shows these inspired young men the ins and outs of politics through the course of a strenuous seven days, where they must form a mock government. By the end, the Legion hopes that the young men will be made aware of the politics, democracy, and effort it takes to running a successful campaign. Famous political figures such as Dick Cheney, Corey Booker, Bill Clinton, Rush Limbaugh, and many others, have participated in this event. Directors Jesse Moss and Amanda McBride guide us through a world that includes all the juicy aspects of politics: unity, idealism, hope, and backstabbing. Is this peek into the 85 year old institution worth the ride?

The chosen state for this documentary is Texas, which is one that always goes red. This is a big challenge for Steven, the son of a former undocumented immigrant, whose politics are far more left leaning than the majority of his peers. His humbleness comes from his desire to honor his family since, out of all his brothers and sisters, he will be the first one to graduate high school. We get an immediate look into his work ethic during one of the first tasks of this event. Early on, all the boys are broken up into two different political sides, Federalist and Nationalist, and in order to be considered for the highest seat, the governorship, you must collect 30 signatures from people in your political group in a short amount of time. Steven hustles his way to this goal. His elected chairman, Rene, who is the second, out of the four boys that are the focus of the film, is a progressive black teen that jokingly remarks about the abundance of whites that surround him. Unfortunately, he experiences some of the more negative behavior from the people, especially those within his own party. Also running for the Nationalist Governorship is a boy named Robert. Robert encompasses all the charisma and flash of a politician. You can’t help but to feel charmed by his demeanor. Finally, the Federalist side is represented by Ben, a Ronald Reagan loving Republican who becomes the chairman for his side. The young man has two prosthetic legs and an underdeveloped right arm, due to the effects of Meningitis, but that hasn’t slowed him down one bit. Since he knows he can never fight for the country on the battlefield, his dream to fight in other ways, specifically in the offices of the C.I.A.

Moss and McBride show the good and bad of it all. From the start of this film, you can see how bred these boys are for politics. In order to be one of the 1100, you must go through an interview process with members of the Legion. All the kids robotically give safe answers to the questions, about the love for their country and what makes them fit to participate. This is what makes a later scene, where the boys playfully start proposing ridiculous sounding bills, so much fun. It is the one time where they lean into their fun, but immature, adolescent humor. It shows the audience that they haven’t been totally stripped of their youth yet. The directors have their subjects sit on a couch, commentating their views on the one-week program. As the time passes, the boys get looser with their views and more comfortable with their body language. The documentary style allows them to express much that can’t be said in front of their supporters. One even reveals that he is pro-choice, but runs on a pro-life argument, considering his audience is mostly white Conservatives. If only our real-life elected politicians had a comfy couch that they could express their true feelings on. Both Steven and Rene know the game of politics, but Steven is far more in control with his emotions. There are moments when both of them get the dirty end of the stick from the opposition. One part involves shameful smearing tactics using social media.   Steven responds with upfront honesty, despite his opponents blatantly saying they will twist the story to make him look bad.

During the Q&A, the directors Amanda McBaine and Jesse Moss gave their insight to the entire project, which took 350 hours of footage and trimmed it down to tight 114 minutes. As with the audience, Steven shocked them with his transition from the quiet kid, who just made the signature deadline, to the charismatic leader of the Nationalist party. To some, Steven’s good nature will seem naïve, but it shows a brighter future for this country. Hell, all of these kids are on the road to success. One of the more interesting aspects of the interview was the fact Rene wasn’t originally part of the directors’ vision, but the more they were around him, the more they were impressed with his will to succeed in an area where he was the odd one out. Those qualities shot him up to become one of main boys studied for this film. The four boys, along with all the others, are far more accomplished and determined than people twice their age. In the epilogue, we see that no matter what happened in that week, all of them bounced back and have continued on the path towards success.

Boys State is a beautiful documentary. There is a Girls State, that hopefully will be the follow up to this interesting and deep film. This is one that should be shown, not only in social studies classes, but to all students. It shows how you can be the power of change and, in turn, can be the inspiration to many.