Lucille Ball’s reign during the Golden Age of television was something to behold. Lucy took the nation by storm with her sit-com about a fictitious marriage between her and her real-life husband, Desi Arnaz. Despite her playing an airhead on screen, off screen she was a woman in control of her destiny. Academy Award winning writer, Aaron Sorkin, who also directs, takes us into one week of her life, where you see her challenged in more ways than one.

Lucy and company are getting ready to film the episode “Fred and Ethel Fight,” but she is facing problems that are both personal and work related. When she was younger, she checked the box that would be in favor of turning the United States into a Communist country. Of course, this is a big mistake that now has come back to haunt her, and possibly ruin her career. On top of that, she is pregnant, and what seems like such a trivial, or non-problem, to the viewer, was something that could jeopardize the show. Her desire to incorporate it into the storyline is met with resistance, since this was the time where the values of America were so incredibly over the top that the studio executives couldn’t fathom that viewers understood that her and Desi had to have sex, OH NO!, in order for her to be with child. How can you explain them making love? They sleep in two different beds! Finally, the most personal problem comes from her husband’s possible infidelity. Sorkin also showcases problems related to the production of the show: a director, who Lucy feels is terrible, the depiction of women, clashes with costars, and the overall stress of keeping the show alive.

This is a lot to handle, but with Sorkin’s quick, and razor sharp dialogue, it all happens at warp speed. He has a lot of help from a brilliant cast led by Nicole Kidman. Kidman takes his dialogue and runs with it, looking like she is having the time of her life. She takes command of the screen. Unless you are a Lucy purist, she looks enough like her to buy it. Sorkin’s interpretations of real people rarely look like the actor playing them.     The actors who play his characters usually win you over with bringing their best and worst traits forward while being less concerned about doing an exact impersonation.   His Lucy uses her gifted sense of humor to both diffuse situations and add light into them. The show is most important to her. Yes, her insecurities about her marriage loom, but she has worked too hard to get where she is, especially in the time period the film takes place in. We are shown that prior to the show, she had climbed the ladder at RKO studios, only to be fired for being too old. This causes her to go into panic mode quite often. There are points in the movie that she becomes obsessed with tiny details in the show. This is all connected to her suspicions about Desi, but Kidman plays it like a stubborn dog who won’t let go of a toy. We all know that Kidman can play vulnerable quite well, but she is equally as good at playing the fierce nature of Lucy. Even though this is more about who Lucy was as a person, there are recreations of the show, where Kidman nails the voice, comedic timing, and overall essence of the stage version of her. 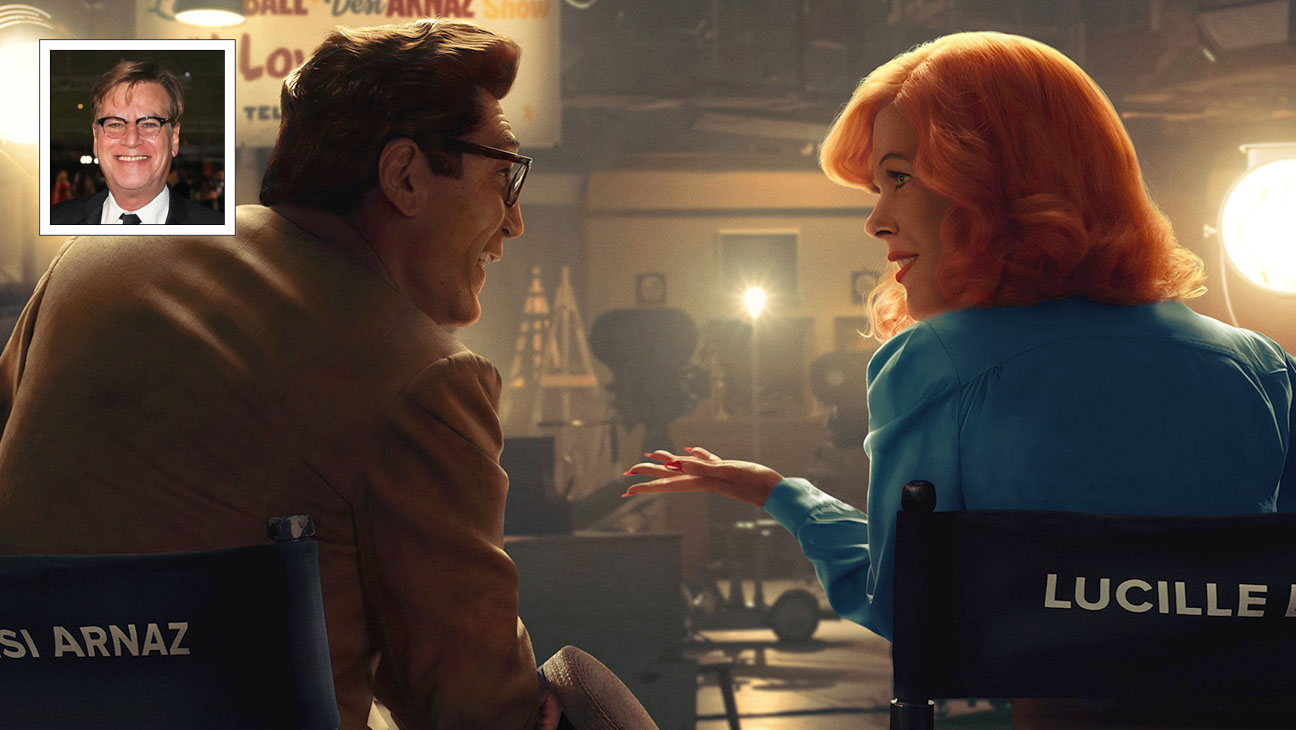 Surrounding Kidman are fantastic actors, beautiful production value, and a director who is starting to find his voice. This is the third time that Sorkin has directed one of his own scripts. Even though he has seemed to learn how to trim his scripts, they are still very heavy, from a dialogue point of view. The directors who worked with him in the past, most specifically David Fincher, who helmed 2010’s The Social Network, inject their visual storytelling into the past films. While the sets, music, and overall production are beautiful, it all feels flat. Sorkin spent years on television, and you can see it through his directing. On top of being mundane, it feels very staged and predictable.

He may know this since he rounds the cast up with some damn good performers.   While Javier Bardem looks nothing like Desi, remember what we said up there, he does bring his charming nature alive quite well. He is mischievous, loving, but like all good actors, seems like he is hiding something. Alia Shawkat, mostly known from Arrested Development, is a young screenwriter. The performance is good, but she feels like a walking Sorkin dialogue machine. This character is used to reflect his thoughts about the mistreatment of women during that time. It is admirable but feels false. Finally, the parts of William Frawley and Vivian Vance, or Fred and Ethel, are brilliantly played by J.K. Simmons and Nina Arianda. This is Arianda’s first big role. Outside of playing the best friend of the TV icon, she struggles with her image and friendship with Lucy through the weeklong production. This is where Sorkin’s dialogue works with the insecurities of two aging actresses, coming out in full swing. Arianda keeps up with her costar perfectly. Simmons, who never gives a bad performance, is playing up the grumpy side he does so well. He also has a side that comforts Lucy when things go disarray that will remind you of a grumpy elder who can give sage advice when needed.

There is a lot to unpack here and, thanks to the bulky script, but any flaws can be overlooked by the performances of the entire cast. Sorkin knew that any problems that would arise, would be solved by that component. Overall, watching them is worth the ride.

I am giving Being the Ricardos a 4 out of 5 Hairpieces!