Like Cats, the Twilight Saga and Movie 43 –I’ve put myself through some real shit haven’t I – I only watched 365 Days because of the bad reviews, with some calling it a worse version of 50 Shades Of Grey. Curiosity slowly grew on me until I figured I’d better make my own judgement to see why people were shitting on this so hard.

Turns out it’s a rape fantasy and that might be why.

The film follows Sicilian mafia boss Massimo who took over the crime family five years ago after his father was killed and himself wounded in a deal gone bad. We also follow Laura, an executive woman – I don’t know what she does and in a moment it won’t matter so f**k it – who goes on holiday to Italy for her birthday with her friend (or sister, it’s never really explained)  Olga and her shitty boyfriend Martin when she has a chance run-in with Massimo and naturally kidnaps her.

Here’s the thing, just before Massimo and his dad were shot, Massimo saw a mysterious woman on the beach and when he was in hospital all he could see in his head was that woman. Turns out that woman was Laura and Massimo has spent five years and countless millions trying to find out who she was and now that he’s found her he’s not letting her get away. But since this is supposed to be a romance film there’s some leeway, Massimo tells Laura that he will keep her for 365 Days and in that time he will try to get her to fall in love with him. Laura naturally finds this to be absolute batshit, but after sometime she starts to see a softer side of Massimo, one that struggles with the guilt of losing his father and pressures of leadership in a world that demands toxic masculinity and together they work through their shared pain to…

I’m just messing with you; no Massimo’s idea of getting his kidnap victim to fall in love with him is to continuingly show off his cock and have her gagging for it, since he has a rule that he won’t do anything without Laura’s permission so he wants her to want him. Meanwhile, rather than freaking the hell out starts playing into this f**ked-up game and cockteases Massimo into nearly assaulting her multiple times and not once thinks ‘This guy is a murdering gangster and a kidnapper, why am I not running away like a normal person?’

Only they don’t die because this is the first in a trilogy which means this shitty cliff-hanger that they pulled out of their arse didn’t need to exist because they don’t even sequel tease, they just straight up have Laura presumed dead and leave on that note, that she went through all that shit and gets killed for it.  I could see the argument being made that it’s to punish Massimo for his crimes by taking away the one thing he cared about, in which case I say why not punish him by killing the rapist prick.

I’m getting too wrapped up in this story because to say it’s problematic is insulting, it actively promotes sexual violence as a good thing and treats Stockholm syndrome like it’s a goddamn miracle cure-all. On top of all that it’s boring, the whole thing takes place in less than a year and it rushes through this unhealthy romance with nothing to offer the relationship except a lot of sex, no love, no care, nothing but two shitty people being shit together. 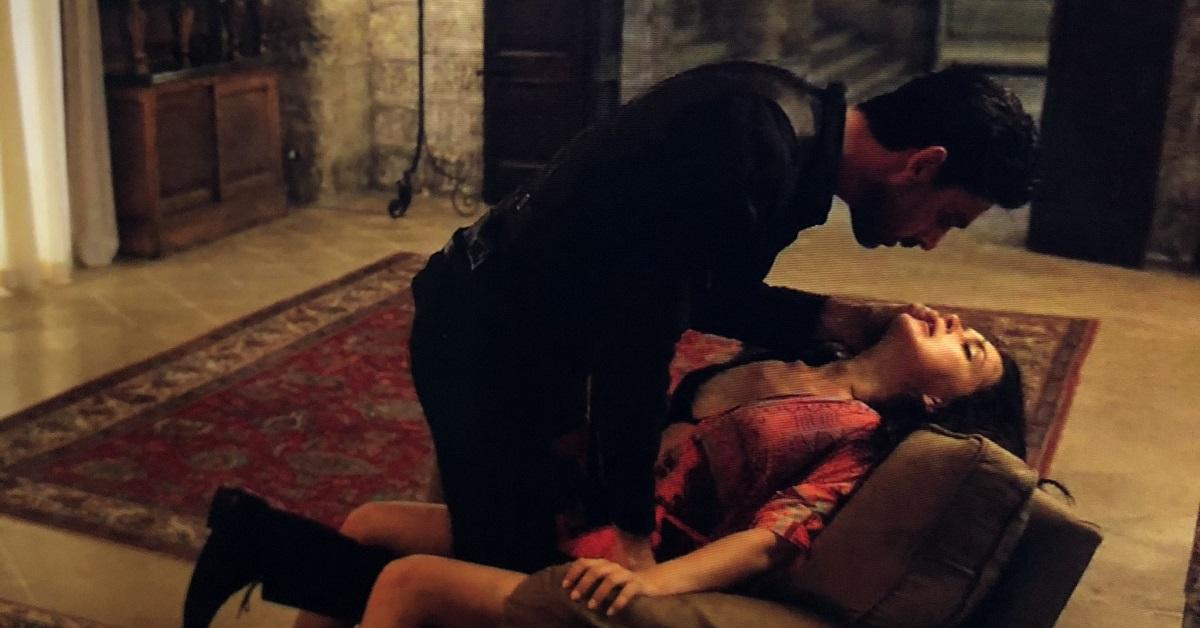 Outside of the main couple nobody mattered, shitty boyfriend Martin was a shitty boyfriend and nothing else – as if that’s suppose to redeem anyone for their behavior – while sister/friend Olga disappeared for most of the film then came back understandably furious about the situation Laura found herself in only to throw that anger away on getting pampered and going shopping for wedding dresses because forget the fact that sexual assault has taken place, weddings matter most.

I actually vomited a little writing that last paragraph.

Out of Laura and Massimo, I think I hate Massimo more but don’t think that excuses Laura, it’s like asking who I prefer out of Fred and Rosemary West. The slightest bit of praise I’ll give Laura is that the film obviously wants to give her some agency so she’s presented as this fiery businesswoman doing business – still don’t know what he job is, still don’t care – and initially finds Massimo to be bonkers. But that kind of makes it worse when she falls for the bonkers, for reasons I’m still not sure about she finds his habits of pulling his cock out and threats of rape to be too hot to handle and for the rest of the film, this business-savvy woman slowly turns into a love-struck fool. What little character she had at the start is dissolved until there’s nothing left but a vagina on legs because that all she amounts to, hell even before she falls in love all she does is tease Massimo to piss him off then gets scared when he’s pissed off. She’s arguably the main character of this film and she’s got no f**king character, she’s a prize, a possession to enhance Massimo’s story and nothing else.

Speaking of which, Massimo is creepy and I’m being generous with that, from his frequent use of ‘Baby girl’ to his incessant nudity to his insane temper, nothing about this guy screams good person let alone good boyfriend, it’s f**ked up enough that he has this insane plan to kidnap a woman into loving him but even more f**ked up that it works, if he wasn’t hot than this would be a Criminal Minds episode. I genuinely don’t know how I was ever supposed to root for this guy as a romantic lead and it’s not just the kidnapping, let’s pretend that we can get behind that, that we’re all in on Massimo getting Laura to fall in love with him, the guy is instantly a hypocrite and that’s just the start. While he’s telling Laura that he won’t do anything to her without her permission he is actively groping her breast without her permission, and that happens a number of times, he ties her to a bed, he fingers her, he kisses her, all without her permission. And even if we can shove our heads so far up our own asses to ignore that amount of sexual violence then having him actively harm, maim and murder people in front of Laura because he’s a gangster and gangsters killing people should’ve set off the alarm bells. Massimo is THE most problematic love interest I have ever seen in a film and I can’t wrap my head around anyone finding this guy remotely charming, he’s disturbed, disturbing, and dangerous.

The only – and I mean ONLY – praise I’ll give the film is the sex scenes and even that has caveats. Out context the sex scenes are surprisingly graphic, to the point where some viewers, myself included, believes that some real screwing was going on here. It’s full on softcore porn but taken as just sex scenes there’s something interesting about seeing a film portray them that sexually charged. But taken with context it’s f**king terrible in both concept and execution, I don’t know how long these two ass-hats were together before they gave in to their dumb libidos, but it’s about half-way through the film so probably 3 months if I’m being generous. And that first sex scene is a full 10 minute montage across several rooms on Massimo’s private yacht, including one time actually on the bow of the yacht while the camera doing a goddamn tracking shot in the distance. Anytime I found myself thinking, “This is hotter than I thought once you ignore the rape” the film would switch to some ridiculous angle and I’d be reminded that I’m watching a film that thinks love and rape are in equal measure. There’s a great number of sex scenes – far too many honestly – and while they all keep the softcore nature, the shock value wears off until you’re left with another five minutes wasted on watching these two eejits bump uglies.

And I am going to harp on about the sexual violence because it’s too f**king prevalent to ignore, I can’t talk about the direction because there is none, the first half is Massimo’s creepiness being portrayed as romantic and the second half boring half-assed love story intercut with the occasional sex scene for no good reason. The whole thing is too drab and dull to pay attention to so all I can do is notice how shitty this romance is because it’s certainly not hot and heavy despite how many gratuitous sex scenes they throw at me. What makes it worse is that at times the film knows that Massimo is wrong, Laura is initially upset before she drinks the Kool-Aid, Olga flat out offers to help Laura escape once she finds out, but those moments are glossed over so that these two can have their happily ever after and I’m left asking myself what kinds of a shitting message is that? It doesn’t matter what illegal and traumatizing shit you do, you still deserve lifelong happiness? Get the hell out of here.

I was initially going to give 365 Days a slightly higher because I thought it was more boring than bad, but writing this out, this film is far too dangerous to even give it a rating this is a legitimate pro-rape movie and that cannot stand in this day and age. Nothing about this movie works, the story is honest to god sickening, the characters too stupid and too creepy to make anything close to a romantic pairing, and the direction too one-note to find any spark of chemistry. And what’s more is that I’m glad, I’m glad there was no chemistry because there shouldn’t have been; at no point should I have been invested in what amount to victim abuse and emotional trauma.

Don’t watch this film, it’s not even in that “so bad it’s good” category because it’s far worse than that and too damaging to deserve any more attention.