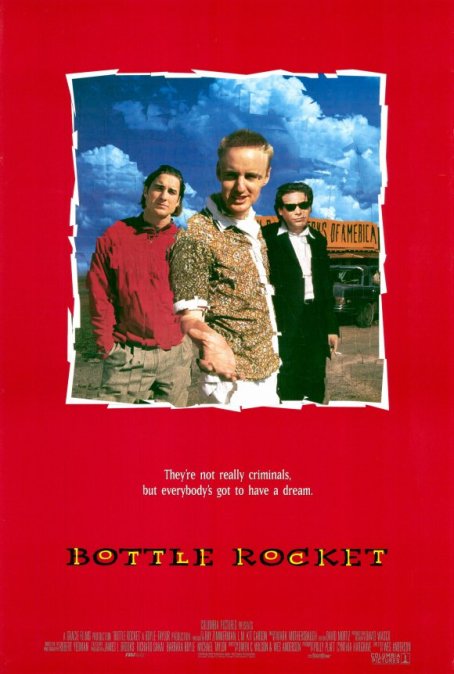 Sometimes, I get bored reviewing new movies so for some reason, I wanted to go through all the Wes Anderson movies in chronological order in the meantime. It’s just something that gives me a challenge to do and maybe there will be unexpected feelings and unique thoughts I never saw coming. So, without further delay, let’s begin with his 1996 debut, Bottle Rocket. I remember this being a movie that got a lot of play on Comedy Central back in the day and it was always the kind of movie that I never felt compelled to watch when it’s on. Honestly, I was never impressed with the bits I’d seen, but there were always interesting sequences that made the rest of the movie worth it. So, in subsequent years, I would watch bits and pieces because there was sometimes nothing to watch on cable. When I last watched this movie, I rated this movie rather highly back when I was more of a snob when it came to movies. But as anyone who has read my Phantom Thread review, I’ve decided to just to watch movies as their own individual self, judge them as their own thing no matter who’s involved in terms of the directors, the writers, or the actors. Watching this again was interesting. As a movie directed by someone who would be later become one of the most idiosyncratic and quirky filmmakers of our time, younger middle school me who watched this on cable was right. Outside of a few well directed sequences, it’s fine.

Owen Wilson makes an impression as a young man named Dignan, who has a big plan in mind, and he wants to bring his friends in on it. He wants to become a robber, so they have enough money for a 75-year plan to live a good life without doing actual work. It also doesn’t hurt that he wants to impress his mentor and former employer, Mr. Henry. I really liked him in this movie because he was such a fun character and his laidback style makes him more entertaining in contrast to many of the other characters’ very dry and calm delivery. In a movie that has such a dry sense of humor and a very meticulous and straightforward vision, he gives the movie a great deal of levity. It’s easy to see why he became a big star because he’s got a very magnetic personality that makes him so likable and compelling to watch on screen. This is the probably one of the best performances he’s given and it’s crazy considering this was his first role. Luke Wilson plays Dignan’s friend, Anthony, who’s less impressed when Dignan gives him the layout of what they’re going to do. Being the good friend that he is, he decides to go along with it. I totally forgot while watching this that he was in a mental hospital. It’s a weird detail that doesn’t really go anywhere, but it seems to be a test run for what Anderson does with Luke more successfully in The Royal Tenenbaums. Both Wilsons are too passive in their respective roles, but it ends up working out in the movie’s favor. It helps to informs how their relationship functions as their plan moves forward. They never really think ahead and don’t really plan for any mistakes, which eventually leads to a hilarious climax in which they attempt to rob a storage company. They clearly have a lot of love for each other, but they never make the effort to pay attention to the little details. But the fact that all these characters love and care for each other more than they want to rob this bank adds to the emotional core of the movie. It’s never overt or on the nose about it but it’s all about the characters’ actions and decisions. 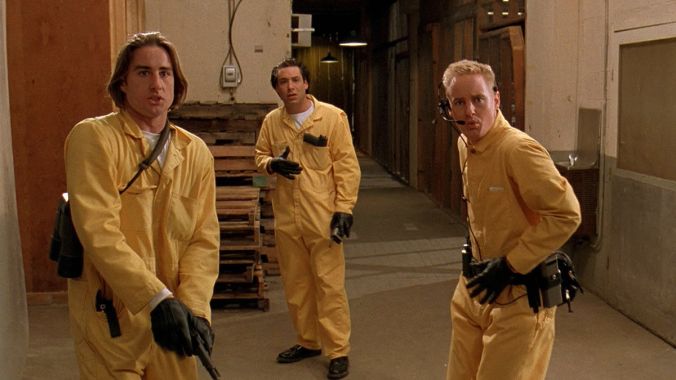 Luke Wilson was always overlooked in my mind because even in his more high-profile roles, he’s a good subversive choice for the obvious love interest or sidekick role. He has this everyman quality that successfully juxtaposes Owen’s relaxed style. He has some funny moments when he tries to get a translator to express his love for a young immigrant maid named Inez (Lumi Cavazos). Those parts of the movie were nice little moments even if I wasn’t totally enamored with the relationship with Anthony and Inez. But the way he reacts to what’s going on in their relationship like he’s in a rom-com is more interesting than the actual relationship itself. It felt too much like a white guy being wowed by someone just because she’s foreign. She doesn’t really exist other than to inform Anthony’s character and make him satisfied about rejecting his white privilege and what that privilege has given him. Along the way, Dignan and Anthony also bring a getaway driver named Bob (Robert Musgrave), who is more than happy to help if it gets him out of the house and away from his older brother’s torment. I feel like Bob was supposed to be the big breakout character that unfortunately never came to be but his moments of standing up to Dignan are always funny. How he and Dignan play against each other is interesting how different they come across each other as opposed to how he and Anthony across each other. Musgrave is very good in the role as he adds some pathos and sympathy to a role that probably wouldn’t have gotten it anywhere else.

After the three men go through with their crimes, they go on the run and stay in a hotel. When they get to the hotel is when we are introduced to Anthony’s love interest Inez. All the stuff with the translator and them going out on the town is interesting considering they’re people of a different lifestyle and culture from our main characters, but then the movie never goes past the surface level of letting us get enamored with what’s going on. It’s more concerned with Dignan trying to get to his mentor Mr. Henry, played by James Caan in a nice and dependable role. Mr. Henry feels like a more compelling character than the movie wants to show off, but it does help the twist at the end more effective. I did like his weird kimono he wears, the small little backstory of his lawn company, and the eccentric group of characters that inhabit it. Kumar Pallana, who would later be a recurring actor in Anderson’s movies, stands out most in this group of landscapers/criminals also known as the “Lawn Wranglers.” As a safecracker that eventually helps the guys with another heist, he adds another memorable moment to the movie’s delightfully executed climatic heist. 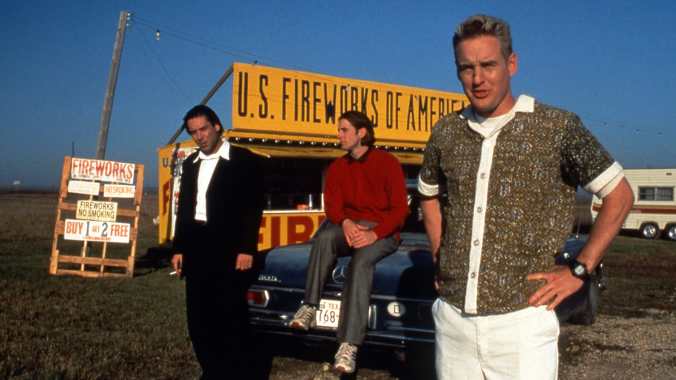 With his first movie, it feels like Anderson’s style is there, but it’s still in the beta stage. You can tell that it’s a first-time filmmaker’s movie in terms of how limited the settings and the soundtrack are, which are usually some of Anderson’s strongest points. However, he does do enough to make the movie engaging. The movie is probably too passive and stiff in its pacing at times, but it tends to work better on a moment by moment basis. There are some cool rock tunes on the soundtrack that compliments the film very well. The incredible use of The Rolling Stones’ “2000 Man” during a chase near the end of the film is the best example of how Anderson goes from first time figuring it out Wes Anderson into becoming the Super Saiyan Wes Anderson we all know and love. Composer Mark Mothersbaugh’s score, like all of Anderson’s movies, has a naivete and a playfulness to it that keeps the movie lighthearted. Even with the cold and dry style that Anderson started to cement here, there’s a sense of genuineness and niceness that makes this a movie that I’m happy to revisit occasionally, regardless of my reservations.

I am giving Bottle Rocket a 3 out of 5 Hairpieces!