As explained in the film’s opening narration, a virus known as ID-7 (or Red Eye due to carriers having one red eye) has broken out across the world, the effects of which lower inhibitions, increase impulses, and allow people to live out their darkest desires for a few hours until the virus dilutes itself in the body. Nobody goes crazy, the infected keep their faculties, they just stop giving a shit, and let loose. This involves destroying property, openly screwing in public, and even murdering their co-workers with the first case of ID-7 Related Death being thrown out in court, due to the killer not having full control of himself.

Our main character is Derek Cho (Steven Yeun), a lawyer at Towers & Smyth Consulting whose recent promotion has him questioning if the soul-sucking nature of his job is worth the financial gain. When Derek finds out that his superior Cara (Caroline Chikezie) has pinned a major error against him to make him the fall-guy and prevent the company losing a major client. Derek tries everything to save his job, but CEO John Towers (Steven Brand) doesn’t care. When Derek refuses to sign the requisite forms that would make him culpable, he is fired by HR Lester McGill (Dallas Roberts) and denied severance.

And at that exact moment, the building is put under quarantine when the ID-7 virus is detected and nobody is allowed in or out for 8 hours until the virus is gone. Derek sees the chance to murder Cara, John, Lester and every other “Big-Wig” piece of shit that screwed him over and get away with it because nobody is liable for their actions when infected with ID-7. Teaming up with Melanie Cross (Samara Weaving), a client who came in for more time on a foreclosure and ended up getting trapped in the building with the quarantine was enforced, the two of them fight through each level of the building, trying to reach the top before the quarantine is lifted, and give every asswipe what’s coming to them.

There’s a really good set-up here with the ID-7 virus, people are still free-thinking and cognitive, they just don’t care anymore and that allows the film to go balls-to-the-wall insane, but keep everyone from acting irrationally. The overall plot of yuppie pricks getting killed is fun in and of itself, but Derek and Melanie’s quest for vengeance makes it that much more satisfying to see them tear through these assholes, while also giving the film enough drive with each new level bringing a different sub-boss to defeat before moving on.

Characters were a lot of fun to watch, even the villains were entertaining with Lester’s cold-hearted approach to firing employees, Cara’s bitchy attitude and power-hungry nature. Especially, John Towers who somehow managed to be an even bigger asshole with every new scene with everything from pissing on a corpse to actively putting out a hit on Derek. All the while, smashing his golf-club into everything around him and smashing cocaine into his face. As the bad guy, he was entertaining as hell to watch and in fact, all the villains were fun to see how easily they screwed everyone (even each other) over to save their own ass.

Accompanying Derek on his quest for white-collar murder was Melanie, another lawyer, but from a different, much smaller firm who needed more time to pay-off a foreclosure, or risk losing her house. She talked with Derek before the outbreak and was told there was nothing to be done. While not the best start to their relationship, Melanie understands the concept ‘The Enemy of my enemy’ and teams up with Derek to find the boss who denied her extension, and take her own revenge. Melanie is a really fun character, part of it has to be with Weaving’s natural charisma (and the fact that she still looks really good caked in blood) but mostly it’s due to her complete detachment to everyone around her. Where Derek knows everybody personally and can converse and bargain with them, Melanie just gets on with the act of shooting people with a nail-gun. What’s also in her favor is that you can see her slowly building trust of Derek as the film goes on and the two of them do great things together. They’re both self-aware enough to know their infected, but damn if they’re not going to enjoy it first.

Derek himself was just as much fun to watch, before the outbreak Derek had a lot of conflict in himself, in his short time with the company he’d lost a lot of the wide-eyed optimism and some of his humanity as well, trying to hold onto the little he had with little acts of kindness. His subsequent firing might have been a blessing had he not been giving the option of accepting the fall and risk being sued by the company or losing his severance. As such when the outbreak occurs, he is more than happy to not only kill everyone above his pay-grade, but to also cheat them out of millions by exposing their dirty dealings to their clients. It’s absolutely brilliant to watch Yeun let loose and he makes Derek so easy to root for, partly in fact because unlike his bosses, Derek still maintains a level of empathy. While he has his tirades including a great moment where he delivers the terms and conditions of a fight while Faith No More plays in the background, it’s the smaller moments like his sadness over his friend’s death, or his ongoing attempts to help Melanie between the madness that endear us to him, all while he brutally kills his co-workers. 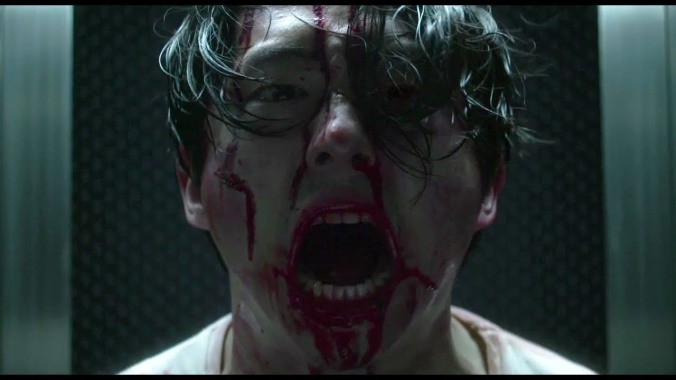 The film is brought to us by Joe Lynch, not a director I’ve seen before, but I’ll check out his back catalog after this because he clearly has a talent for making bloody fun. The complete lack of moral and inhibitions is what makes the film so entertaining, outside of Derek and Melanie, you don’t give a shit about anyone and Lynch is able to tap into that portion of your brain that screams for blood. Even going so far as to include the Gladiatorial thumbs down as a plot point in the film. I’d like to believe there was some kind of meta narrative going on here with the film’s open acceptance of sex and violence allowing the audience to also indulge in their lack of morals, but I think I’m reading too much into this. Honestly, it’s just a film to have fun with, to sit back and enjoy rich kid assholes getting the shit beaten out of them, nothing more nothing less, although if you want to get into the social commentary of white collar criminals and the pissed off drones, then it’s there, just covered in brain matter.

What Lynch does well is keeping a quick pace and good style to the whole picture, while personally I would’ve enjoyed a little more blood and guts then what the film had. Obviously, being in an office building there’s not a lot to work with, but Lynch gets around that by giving Derek and Melanie the upper-hand with some power-tools, which opens up the film nicely with Melanie’s nail-gun being particularly useful for a good portion of the film, as well as an electric saw during the film’s most gruesome moment. At only 87 minutes, there’s not a huge amount going on, but once the set-up’s over with in the first 20 minutes or so, it’s just go time and that’s to the film’s credit. It knows that it’s not high-art and doesn’t care, it just wants to get to the next boss stage, and enjoy itself. Aside from one minor side-story with Melanie and one of the bosses before the finale, there’s nothing that keeps the film away from its prime goal of reaching the top. The film is a forward drive that’s more efficient than I’ve seen for a while, and makes the film a lot easier to sit through.

There’s something primal about Mayhem, and that’s a good thing. It’s a breath of fresh blood-soaked air in today’s cinematic world that’s bringing something simple and fun to its audience. The pairing of Yeun and Weaving is great with both of them embracing the insanity around them and going batshit crazy.  Lynch at the helm directs them towards one of the more entertaining flicks I’ve seen all year.

I am giving Mayhem a 4 out of 5 Hairpieces!