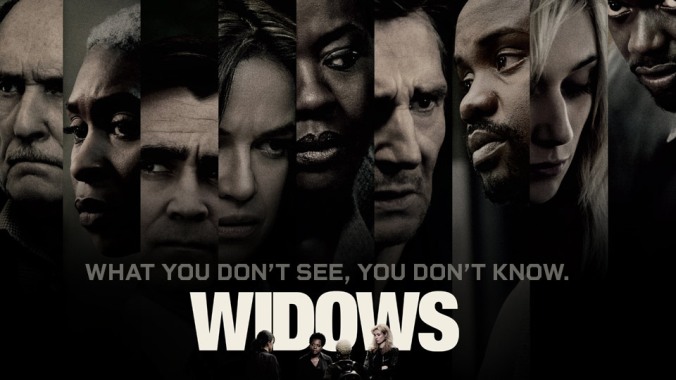 Steve McQueen’s Widows is a very entertaining time as it feels like a throwback to the older dramas that used to be a big deal before superhero movies and franchises were a thing. If you want to see great actors doing their thing while a great director does his best job at being artful while being contained in a mainstream bubble, then this is the movie for you. A lot of the ads made this look like a big action-packed heist movie and just know that it’s not that. If you’ve seen any of McQueen’s other movies, you know what to expect from him here. It’s more of a slow burn character study about how three women are forced to break out of their shells created by their now deceased husbands through their crimes by way of financial stability. While that might seem heavy, it’s engrossing from beginning to end thanks to great performances and McQueen’s directing.

Steve McQueen and co-writer Gillian Flynn definitely have a lot to say in terms of race, politics, and what it manages to say about those things mostly sticks in a way that sets this apart from a lot of movies of its type. Any scenes that might show a friendship developing among the women or some kind of high octane montages never happens, but it doesn’t need to because the characters are already interesting in their own way as following their individual arcs are more intriguing. The whole heist is just a thing for all these women to do just because they have no other choice if they want to keep living.

Viola Davis is Veronica, a recently widowed and well to do woman who’s confronted directly by Jamal, a political candidate/crime boss played by Brian Tyree Henry to get the money that her husband stole from him. Viola Davis is always a dependable actress and she’s great here as she is given some fantastic material to work with. She’s very blunt and matter of fact about how she and the rest of the women have to proceed and she sells that well. It also makes sense that she has to be because of the circumstances. She’s also a very complex character as the movie shows and you understand that she’s pushed against a corner in her current situation. Some actors can be as stone faced and cold as she is, but she seems like she’s actually having fun doing it. If she doesn’t get at least an Oscar nomination, I don’t know what the Academy is even doing to function as an organization anymore.

Elizabeth Debicki as Alice, another woman whose husband was killed during the same robbery, probably has it the worst when it comes to financial hardship and the fact that she lacks self confidence and self esteem. You really feel for her and sympathize with her because she was the one that was probably the least self sufficient and the most subservient due to the abusive relationship she had with her husband and mother. It’s interesting how being involved in the heist actually makes her a stronger person and Debicki sells her transformation very effectively. She’s one of the most relatable characters because she’s the one that’s so out of her element and is harder to adapt to the new developments. She’s a lot of fun to watch as she’s also the most expressive of the widows. 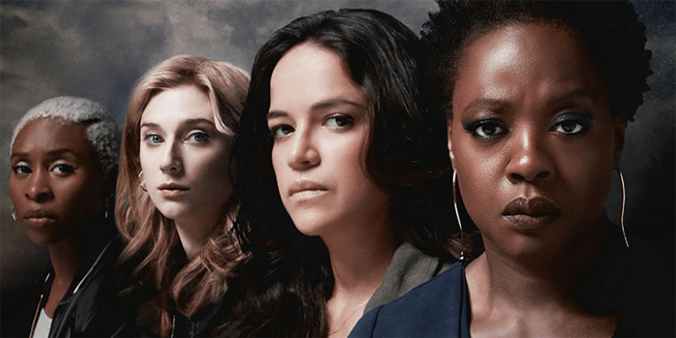 Michelle Rodriguez is good as Linda, the last of the widows, although it’s more of the same from her performance-wise. She’s the same badass character she is in anything. The fact that her life takes an unpleasant turn thanks to some recent unfortunate developments gives her some vulnerability at times that we don’t see often from her in a lot of movies and she does fine when the movie gives her those chances. Unlike the Fast and Furious movies, which are a lot of fun and she’s fun in them, this is the kind of movie where she’s working with a really skilled director and a strong script that actually requires her to act. When the movie puts her up to the task, she manages to hold her own against everyone else.

Cynthia Erivo is Belle, the least connected part of the group, but she was still a compelling character in her own right. Alongside Debicki, she’s among the more relatable of the group. She’s definitely even more so because she doesn’t have the advantages the other women used to have. She’s just a regular everyday person that has regular everyday struggles a lot of us have to deal with. I feel that just makes her more determined to do what she can to stand out from the other women even though Davis doesn’t really want anything to do with her. However, she really makes sufficient contributions and manages to prove that she’s an important part of the group. Daniel Kaluuya as Jamal’s right man and brother, Jatemme, is a great villain. He’s very menacing and intimidating, but the way he’s plays him is very enjoyable. He’s entertaining in his wickedness that you have fun hating him. His character is also great at creating tension and selling the intensity of the situation, as we hope the plan the women have to pull off works just so they don’t feel his wrath.

At times, it might feel like it bites off more than it can chew. Honestly, you could take out all the Colin Farrell scenes and it probably wouldn’t take anything away. It’s probably where the movie feels most like a TV show as it’s feels like a secondary storyline there just to fill time like a show would do. The fact that it’s adapted from an old miniseries probably has a lot to do with this. But like the best shows, McQueen and Flynn manages to find a way to have some connective tissue with the main storyline from a thematic standpoint, even if it’s stretching it. Even still though, Farrell is doing as good of a job as alderman Jack Mulligan, trying to sound as American as he can, and I don’t know if it totally succeeds, but he’s still solid. Robert Duvall as Jack’s father is fine as this is the same kind of role we’re used to see from him by now. The father and son dynamic between Farrell and Duvall is about what you expect from this kind of movie, but it’s still effective. It makes Jack somewhat sympathetic until you realize what he’s up to later in the movie and you realize he’s just as hard to trust and like as most politicians out there. Clearly, he doesn’t want to be his father and expresses as much to his face, but circumstances won’t let him get out of his father’s shadow no matter how open he is about being his own person. It makes him pitiful to a point but not so much to forgive him for some of his actions. The political aspect of the film overall does work on a thematic level when it talks about how women and specifically women of color are being used by the system, and it’s engaging when the attention shifts in this direction. I’d actually be open if McQueen wanted to go all out with this idea in his next movie as he does bring a lot to the table with this subject.

Widows can feel like a more condensed version of The Wire: Chicago mixed with Heat, which I’m more than okay with. A lot of great performances are included here but Viola Davis and Elizabeth Debicki really bring this together. Director Steve McQueen has crafted an intense and gripping drama that is both emotionally complex and satisfying. A lot of the characters were interesting in their own way and I got so caught up in their story that I didn’t want it to end. It does what you expect with a movie of this type, but it’s more about how it’s presented that causes it to leave its best and most lasting impression on you.

I am giving Widows a 4 out of 5 Hairpieces!

Episode 107 of the Cinephellas Podcast gets tastier with movie topics and with Uncle Jesse of the @guytalianseatingitalian podcast joining us! On this episode, the 'Phellas of film discuss a variety of topics about movies, television shows, and more such as,
@logan_myerz reviews a free game for all PS5 owners, 'Astro’s Playroom,' that packs in @playstation nostalgia and introduces you to the new DualSense controller. Stay tuned for more reviews in the 'Level Up with Cinephellas' Video Game series.
We're recording Episode 107 of the #CinephellasPodcast and we're joined by @edwardnortonhands of the @guytalianseatingitalian Podcast. We're discussing actors that have never shared the screen together, underrated actors/actresses, @spidermanmovie : No Way Home, @mortalkombatmovie trailer, and more! 🎞️🎙️🎤🍿
@scorsese_films and @logan_myerz are back to recap the events of Episode 7 (Breaking the Fourth Wall) and Episode 8 (Previously On) of @wandavision . The wild boys will be back later this week to review the season finale that airs March 5th on @disneyplus .
My Tweets