“…When I was a boy, I used to hide things in the linings of the garments.  Things I only knew that were there…..secrets.”

Reynolds Woodcock utters that line to his lover Alma. It is a simple one that both describes his secretive way of life and the tone of this film. Many people have dismissed this thing for its appeared smugness and esoteric nature. Oh, it is also a story about a dressmaker in the 1950’s too! Who wants to watch that? Those qualities are just what is on the surface of Paul Thomas Anderson’s incredible new film that reunites him with his There Will Be Blood actor, Daniel Day-Lewis, who has said this will be his curtain call from the cinematic world. For film lovers, that is enough reason to both get our asses in the seats, and sit through a movie about a dressmaker.

In the upper-class 1950’s London, Woodcock’s name is synonymous with greatest in the fashion world. People await his new designs and dresses in great anticipation. In one specific scene, two young women approach him in a restaurant and comment they would love to be buried in his dresses when they die. It is an odd, and strangely funny compliment that he takes with a smile. His life, creativity, and business are all co-managed by his nonsense, yet loving, sister, Cyril. It is when he meets a wholesome waitress named Alma, who only dreams about the life he comes from, is where his life starts to turn upside down. The two start to date and fall for each other, but it is when she comes back to his house is when the real connection begins. While trying on some of his prototypes, Alma starts to feel validated and through a backhanded compliment he gives her about having the perfect modeling body of having no breasts or shape.  The deeper they fall for each other, you start to see how broken both of them are inside. There are other questions to: What makes an artist strive?  Are some people just better off alone, especially those who get lost in their careers? How far would you go to keep your love, life, and creative spark? The movie goes places that are extremely dark. No worries, spoiling it would be a major disservice to anyone interested in seeing a well written, acted, scored, and directed film.

In his 2012 film, The Master, starring Joaquin Phoenix and the late Phillip Seymour Hoffman, writer and director Paul Thomas Anderson looked at the notion of religion. Before the film dropped, it was said to be a look at Scientology. That film worked so well because it could’ve been any religion or following. Yes, there were some parallels with Scientology, but it looked mainly about the relationship between a leader and a follower. It showed without each other, they could not exist. A follower needs the hope and inspiration that the leader provides. In turn, that follower needs the validation and trust of many. The same could be said here. Anderson shows a toxic relationship between two people who are so codependent of one another. Yes, Woodcock is a genius, but he is a child in the way he treats other people and deals with conflict. Alma is constantly trying to please a man who she knows will never be pleased and mold him into something he isn’t… a warm being. We all have seen a relationship where we ask ourselves, why the hell are they together? This is basically Anderson’s view of why that happens. Once again, even though this takes place in stuffy high society London, you could have dropped these characters anywhere in time…even today. That is what makes Anderson’s writing and directing so rich. Behind the manners, rules, class, and cleanness, we all have our basic emotions. 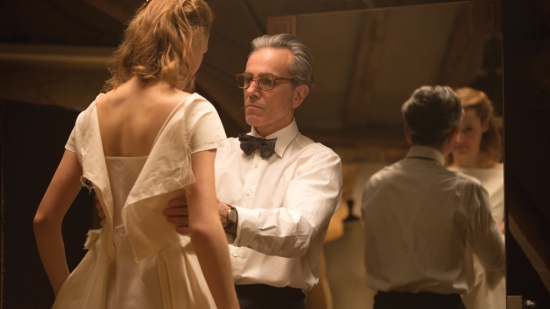 Of course, I will talk about Daniel Day-Lewis, but the performances around him are so damn good too. Cyril, played by Lesley Manville, is such a perfect foil for Woodcock.  Where Woodcock has the maturity of a child, Cyril is the strong hand in the house. One perfect scene shows Cyril immediately shutting her brother’s tantrum and harsh words down. It is performed in such a low key, but domineering matter that you can’t help to smile. Manville is careful not to make her into an ice princess. When Woodcock falls momentarily ill, she is right by her brother’s side to take care of him. She also controls the business and workers with a firm, but understanding hand. It isn’t a showboat performance, yet, it does stand out. A relatively unknown actress, Vickey Krieps is just fantastic as Alma. The movie delves into a very Hitchcock areas at points and that is where Krieps shines and Alma’s beauty is simple as her mind. As the movie progresses, the simple-mindedness is replaced with something incredibly frightening. She is the stereotypical girl who can both melt your heart with a smile and then take you back with her darkness. The two are great performances for Day-Lewis to bounce off of. You know he is great here and he is. It isn’t epic like There Will Be Blood or Lincoln, but those two characters were an actor’s dream. Here, Day-Lewis just plays a flawed genius. You just can’t take your eyes off of him when he is on screen. Everything and anything he does is interesting. He is also quite funny when he is acting out towards Alma. Some of the things he says are mean, yet so funny. The reservation of his character is portrayed by such tight body language from the actor, where he is a stubborn old man who does have a heart under the stone of his outer shell.

The story does have a lot of secrets past what appears to be a boring old school film. It examines what makes human relationships work, no matter how messed it appears to be. It is all beautifully played out, with an unforgettable score by Johnny Greenwood. The film isn’t fast paced, but your patience is definitely awarded if you stick with it…especially that controversial ending.

I am giving Phantom Thread a 4.5 out of 5 Hairpieces!