This is going be a difficult film to talk about without spoilers, so if I let anything slip, I apologize in advance. Truthfully though you should have already seen Mother! before reading this review because it’s a film worth knowing as little about it as possible before going in. That way you can hate it on your own terms because trust me, this will piss a LOT of people off! But if you’re into weird, creepy stuff like me, you might love it.

The film opens with a young woman – named only as Mother (Jennifer Lawrence) – and her older husband, Him (Javier Bardem) fixing up their home. The house was the childhood home of Him, but it burnt down in a fire, and Mother has been rebuilding it while Him has been trying to find new ideas for his poetry writing. They live a peaceful and tranquil life alone in the country, however, that life is interrupted by the arrival of Man (Ed Harris), an elderly doctor who arrives believing the place to be a bed & breakfast. Rather than throw Man out into the night, Him allows Man to sleep in one of their spare bedrooms, much to Mother’s annoyance.

Not long afterwards, Man’s wife named Woman (Michelle Pfeiffer) arrives and makes her presence known with some uncomfortable gossip. Him allows them both to stay but after one too many tragic accidents – including the untimely arrival of Man and Woman’s two sons (Domhnall and Brian Gleeson). Mother tries to get them to leave, but Him wants them to stay, enjoying the passion they have for his poems.

From here the film dives into some really messed up territory and I really don’t want to go too deep into that. The entire third act of the film takes the craziness level to 11. Him’s words are taken as a form of gospel and the insanity that Mother is bombarded with takes her on a journey that words cannot describe, and that’s not event the worst of it. There’s some heavy biblical allegory going on here and it’s not pleasant. It really hits home in that third act with some bible translations being taking VERY literally and very graphically, however, since reading up on some portions I missed, the entire film has some form of religious allegory coursing through it. Some might find it heavy-handed and others are definitely gonna be pissed off when they see what unsavory things Aranofsky has to say. But it’s bold, uncomfortable,and more importantly it’s original.

You’re still forewarned, even if you’ve seen a trailer for this film, it has not been marketed properly. Then again there is no proper way to market this film or prepare anyone for what they will sit through. 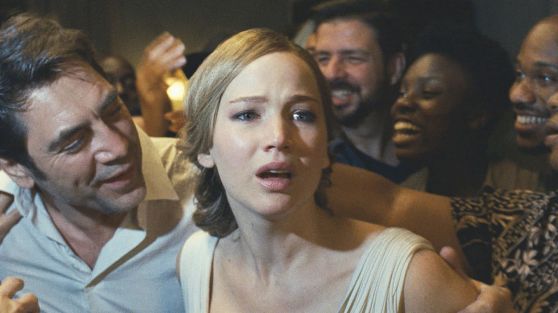 The acting is strong throughout the film with the uncomfortable tones and a lot of character action will seem confusing. Again, back to that final act and even in the time before it, the weird and unpredictable manner in which people behave just adds to the insanity. For example, when Man and Woman’s sons turn up they almost immediately kick things off in a very violent manner, then are never seen again.

Man and Woman are both relatively normal, but they introduce the strangeness to the film. Ed Harris is arguably the most normal character of the film, but he appears from nowhere with a sickly cough and a bad habit of smoking indoors. You never really now where his true intentions lie and once you find out he’s a fan of Him’s works, you can’t help but wonder what brought him to the house. However, there is something genuine about him, he feels like the only person that truly connected with Him in a meaningful way. Woman on the other hand was a much more antagonistic force, a seductive temptress who reveled in her sexuality and in making Mother uncomfortable with her frank discussions. In quite the opposite to her husband, Woman often comes off as cold and distant, especially in the second act she becomes quite emotionless. Not that it’s without its reasons, but you’d expect her act more like her husband and vice-versa.

With Javier Bardem portraying ‘Him,’ you’re never sure where your feelings are suppose to lie with. At times, he’s warm and inviting, at others he’s cold, aloof, and sometimes flat out angry at people. His relationship with Mother is a strange one because while he describes her as being his muse and breathing life back into his home, she notices plenty of times where he’ll ignore her or make decisions without consulting her. As an audience, you’re left feeling that they’re relationship isn’t as perfect as either of them think. Bardem has this great quality where he’s able to switch attitudes on a dime, when the attention is lavished on him he’s warm, smiling and carefree, happy to be the center of attention, but if anyone crosses him, even his own wife, then the cold, haunting stare lingers on them. This reminded me of his character in ‘No Country For Old Men.’

I know Jennifer Lawrence has gotten some flack recently for her seemingly put-on persona and sleep-walking through some of the X-Men films, but I still maintain her as one of the better working actresses today. Mother is up there as one of her best performances! She appears quite timid at first, rarely raising her voice, and trying hard to avoid conflict where possible, often looking to Him for safety and support. However, she comes to realize he might be the one forcing this madness upon her. We’re following the film though her eyes and the confusion she has to suffer through while we suffer at the same time. Honestly, it gets rough at points. Lawrence is put through the wringer with this film and it takes a lot out of her, but she sells the hell out of it. Her reaction to the film’s sure-to-be most infamous scene is just so goddamn visceral!

The film is directed by Darren Aranofsky who is no stranger to controversy. Be it drug abuse in Requiem For A Dream, psycho-lesbian sex in Black Swan, or even touching on religion with his last film Noah. It feels like Aranofsky went all-out on Mother. The film is designed to be controversial, to piss people off, but it’s designed to be as bold and as unflinching as possible. Mother will be harsh and it’ll be confusing – people are already giving it an F rating on Cinemascore – but it’s one of the few modern arguments for films as an art-form where everyone will take to it in a different fashion.

Aside from the biblical references, this is absolutely a horror movie and Aranofsky directs it as such. The cinematography captures a sense of claustrophobic dread, there are a lot of scenes which close-up on Lawrence’s face, and it feels like the camera is suffocating her, while every line of fear can be counted and recognized. At certain points, Aranofsky employs a strange shaking effect that disorientates the viewer, because we’re seeing the film through Mother’s eyes. Aranofsky uses this effect to play around with the timeline, but once that third act hits things happen in an impossible timeline. He recognizes that and is always keeping his audience one step behind so they have no idea what to expect. Finally, there was the sound design, not something I would normally touch upon and in fact I thought it was just my cinema at first, but Aranofsky has deliberately gone out of his way to make each little creak and scratch as loud as possible to keep with the sense of danger and madness. He wants that house to feel like its own character and I think he really pulls it off. So much happens throughout the film that you can’t help but feel like the house is its own entity.

I honestly wish I could go into further detail on what makes Mother work so well, but the film is best viewed blinded because the experience is worth it. I already know people are going to hate this film and people might hate me for recommending it, but know that I am not recommending you to like this film. I recommend you watch Mother because it has been far too long since we’ve had a film this brave, this uncomfortable, and this original!

I am giving Mother a 4 out of 5 Hairpieces!