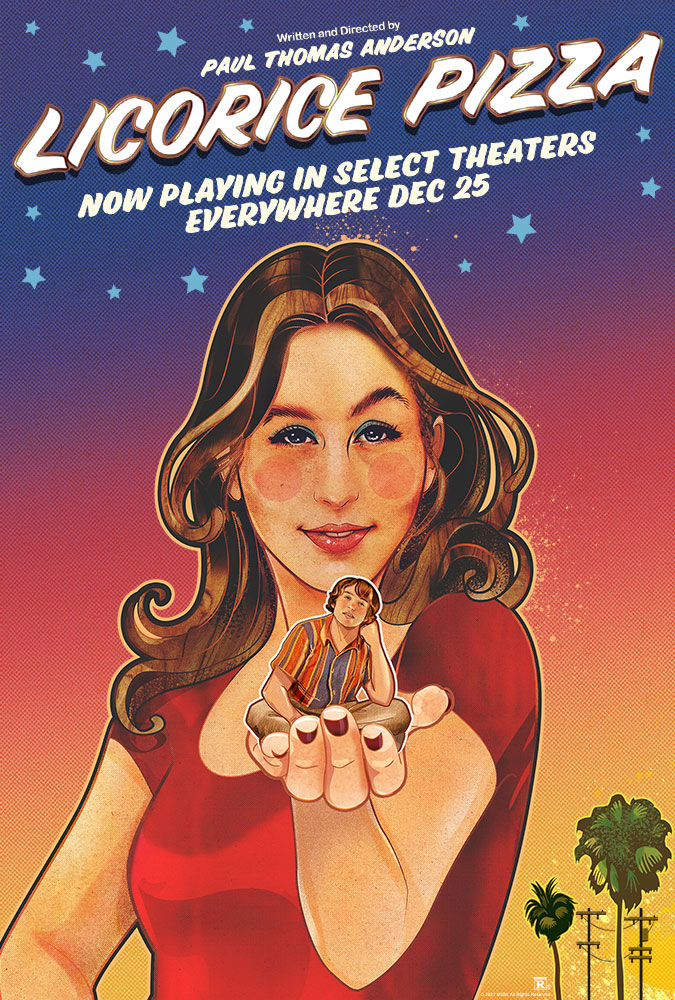 Paul Thomas Anderson returns after 3 years, which is 3 years too long, to share what is basically a series of vignettes set in 1970s San Fernando Valley as we see two individuals, 15-year-old Gary and 25-year-old Alana meet. Gary is infatuated with Alana and constantly pursues her. Alana consistently denies his advances yet continues a platonic relationship with him. The relationship between these two is a weird relationship where it’s potentially romantic, but it’s mostly platonic. There’s always a push and pull as Alana helps Gary with whatever schemes he gets into. It’s mostly just multiple episodic structures of meeting random people in L.A. One scene features a Lucille Ball-esque celebrity, another features a memorable sequence with Bradley Cooper playing the crazy producer Jon Peters, another features former real life LA. councilman Joel Wachs played by Benny Safdie, and so on and so on.

There’s not so much of a plot as much as it’s all an excuse for Anderson to play with a time period that he’s connected to. It results in what may be his most accessible and enjoyable movie in quite a while. It’s got a lot of energy to a lot of the scenes as the music keeps the momentum going and the pacing is as tight as it could be, even with its 2+ hour run time. It feels like you’re on a ride into a setting where literally there’s no COVID and things were less politically complicated. That’s how crazy this world has become: A movie set in a time where you actually had to physically get out of the house to entertain yourself and didn’t have access to phones but worries about being attacked by a bearded Bradley Cooper at a gas station were at an all time high is the year’s most enjoyable and immersive adventure. Every scene feels like a fun little rollercoaster where each moment is like a new destination in that ride.

The Alana/Gary relationship is a strange one, but it’s an interesting dynamic that Anderson is careful to play with. Anderson acts as observer as everything is never judged upon. These are the events that are happening. Just accept it. Alana Haim offers an impressive performance as Alana, a young woman who’s trying to find herself and gets herself into incredible misadventures. There’s a scene where she rides a giant truck that she apparently did for real that she helps contribute to one of the most thrilling sequences of the year. For someone who’s never acted before, I thought she felt very naturalistic and genuine for the role she was in. I could relate in some ways with her because from her perspective, the movie is about someone not knowing what to do with their 20s and as someone who has yet to have everything figured out, I was getting where she was coming from. It always felt like she was just reacting to just get something out of life and to live in the drama for whatever reason. You get why she keeps coming back to Gary because he’s very charming and magnetic. It’s also a nice escape from actual real life concerns. It’s problematic but you kind of get it.

Gary’s backstory of him being an actor really helps to show why he’s such a big personality and why he’s so enthusiastic in his pursuit of Alana. When you’re a successful child actor used to getting what you want, its easy to delude yourself into thinking how hard can it be getting a woman 10 years your senior? Where they’re both are coming from and what they bring to the relationship really shows how lost these two are. It also shows why they connect to each other, even if they’re coming into from different backgrounds and perspective. It’s intentionally messy in the way being young feels. It’s two people who are fascinated with each other and the suspense comes from how they navigate that. It’s not so much about wondering if they get together but what’s the next hurdle they’ll experience together. He’s just such a hustler but it’s thrilling to wonder where it goes next rather than how it will resolve. Gary goes from doing a movie with Not Lucille Ball to selling waterbeds and once you’re into the magic of the movie, you accept his weird trajectory leading to hustling.

Cooper Hoffman (son of Philip Seymour Hoffman) does his father proud as he matches his father’s eccentricity and weird, quietly manic energy as Gary. He and Alana have great chemistry together. The movie is very PG-rated about how it approaches their relationship. I think Anderson just wanted to play with fire and see where it went. The fact that he was infatuated with Alana Haim’s mother, who was his art teacher in elementary school, adds a compelling bit of intrigue to their sort of courtship and makes the whole relationship makes sense contextually from an autobiographical sense. If this isn’t an expensive way to bring closure to your childhood, I don’t know what is. Not to mention that the whole Haim family is in it! Including the mother! And they’re all great!

It’s one of Anderson’s best movies. It’s the kind of movie that rewards on a big screen due to its excellent cinematography. The soundtrack is incredible. It doesn’t hurt that it’s really hilarious from time to time. So many scenes keep you glued to the screen. You have a lot of fun watching how they come across all these different individuals. The American Graffiti feel of it won me over. Most movies should be like American Graffiti: a classic movie that shows the fun of being young and independent. Licorice Pizza is a worthy successor to that as he gets that same kind of energy that youths have regardless of the time period. Parts of me watches movies like this and makes me think that maybe I should’ve had as much fun as this or American Graffiti in my real life as they make being young feel like a blast. It inherits a great magic trick from that movie as it convinces you that a time you never knew could be nostalgic and in turn, it feels like a perfect escape. It’s the right kind of movie that we need at this moment.

I am giving Licorice Pizza a 5 out of 5 hairpieces!