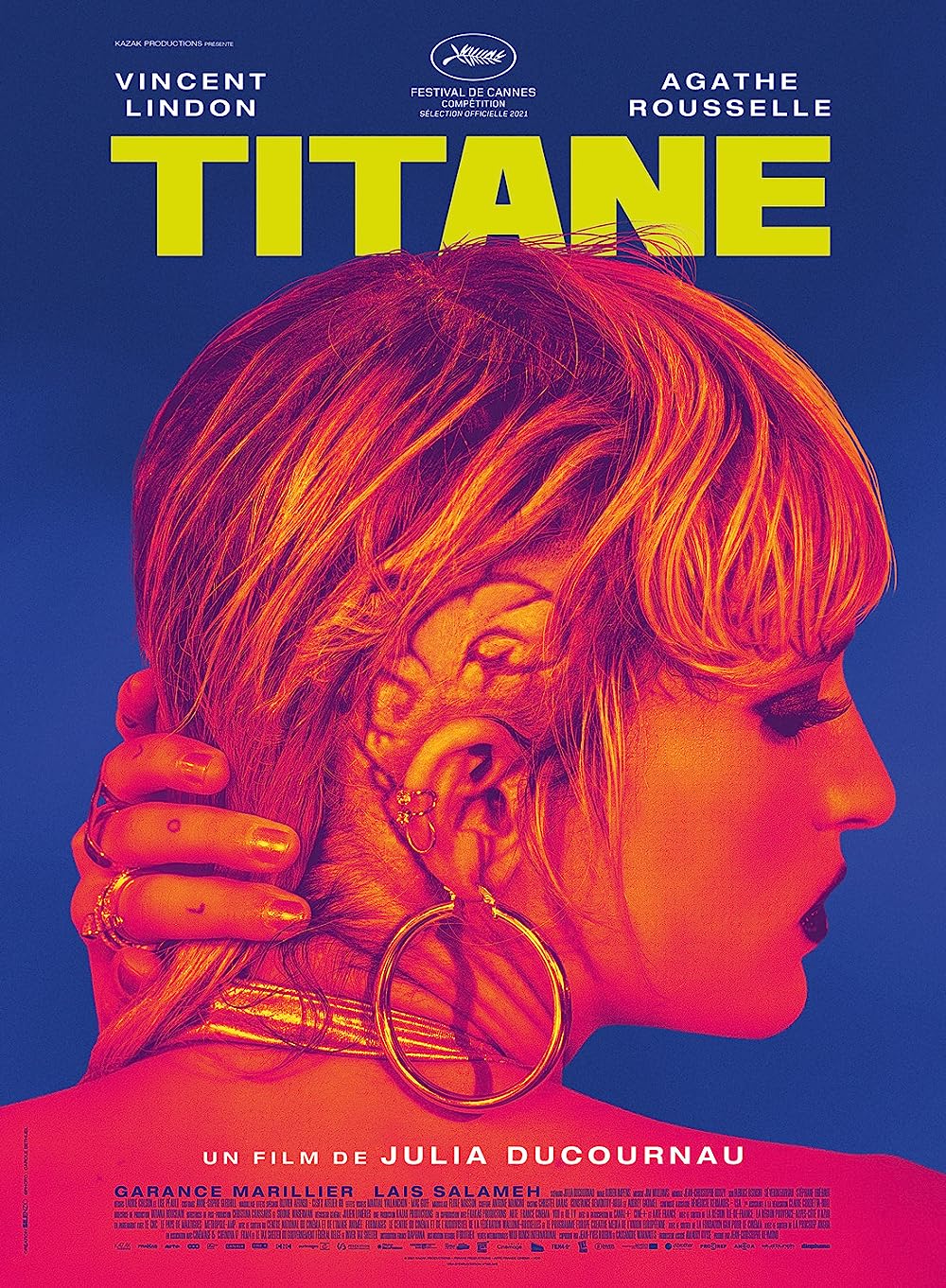 Titane made headlines this past summer when it premiered at the Cannes Film Festival for just being plain bonkers. Everything I heard about it was that it was a movie that needed to be seen to be believed and that’s very much true. Titane is like nothing else you’ll see this year and it’s a reminder that we still need movies like this to exist to remind us of how special cinema can be. It’s also very horny, which is very welcome in this increasingly sexless era in cinema thanks to the MCU and other such big blockbusters. It also helps that it’s from France and as a result doesn’t have to follow the rules like many mainstream American movies. Seriously, it’s wild how this movie is just allowed to exist in an AMC theater that could also be playing Venom 2, which could probably make for a perfect double feature on movies that deal with body autonomy.
Agathe Rousselle is our lead here as Alexia, a woman who works as a car show dancer that helps with her obsession with cars after being in a horrible car accident years ago. She has a large scar on the side of her head where a piece of titanium was inserted after a surgery was done after the car accident that she wears like a badge of honor and makes for an interesting and cool facial feature. Even from the opening minutes when we’re introduced to this character as a child, she is very hard to find endearing or rootable and Julia Ducournau seems to like it that way. Ducournau creates an unforgiving world where humans are bastard-filled bastards with bastard filling and in a way that helps you to find a way to sympathize with what she has to go through on a daily basis even if you don’t like her as a person. I love how rough around the edges it feels. The more I lose faith in humans due to the current state of the world, the more something like the universe of Titane feels more like a reality. The trippy cinematography by Ruben Impens helps to cement its nightmarish yet magnetic atmosphere. Alexia is unapologetic about the choices she makes. As a viewer, this is a blast to watch her go through her life as the movie never judges her for her questionable choices and never tries to rehabilitate her at all. Thanks to Rousselle’s uncompromising and all in performance, we get a compelling ringside seat to one of cinema’s more reprehensible characters in recent memory.
The first half hour is quite a blast to watch because it refuses to fit in any box to make any of this accessible and palatable to the average moviegoer. We’re dealing with a serial killing car show stripper/dancer who loves cars so much that she fucks one and gets pregnant by it. Let me make that clear: a real life human woman, fully naked and soaking wet, fucks a car and gets pregnant from it. You even see the car fucking happen in its entirety and it’s a sight to behold. There’s even shooting motor oil to show evidence of what’s going on that the car cums in case it wasn’t clear. At that point, you either are totally on board or you’re happy to decline the ride this takes you on, which is totally understandable. 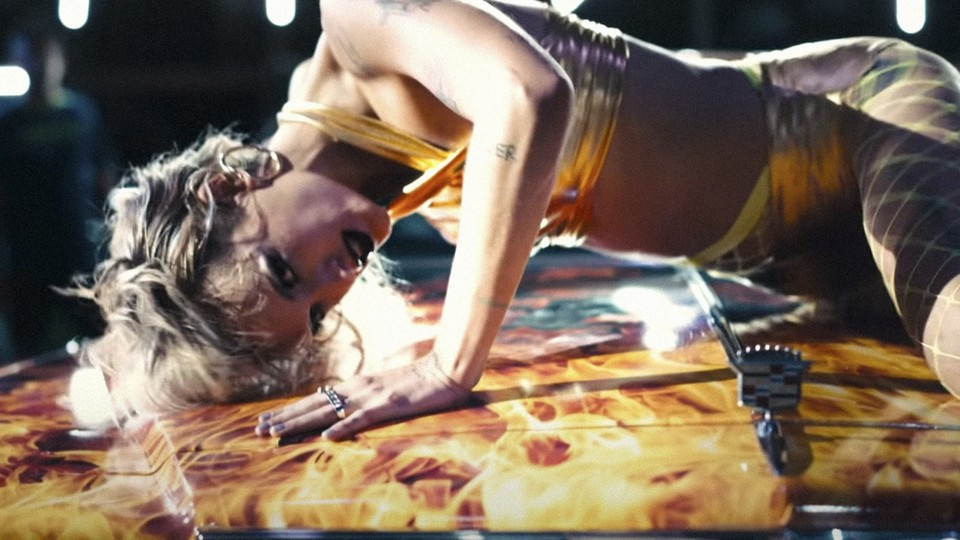 When Alexia’s serial killing gets out of control, she finds herself compelled to go on the run and pose as the missing son of a firefighter. Rousselle is basically giving a mostly silent performance by this point as she tries not to give away her lie and is still compelling to watch. Not to mention, there’s a sense of suspense and intrigue in terms of wondering if she’s going to be caught because we the audience clearly know something is off. Considering she’s fully pregnant with a car baby, what’s the plan moving forward?
Vincent Lindon as the firefighter Vincent is basically the only person you can care for as a person as he means well and it’s sympathetic to see someone so broken be manipulated but somehow inspire this horrible person to somehow be less horrible. He clearly wants to make a connection with this person and at some point, you want the truth to just come out because it’s clear he just needs closure of some kind. The movie, through Lindon’s character, convinces you that if this woman has to become a man to make this man happy, maybe it’s not so bad. Then you start to think, “Am I just as sick and twisted as the movie that I’m willing to go along with the lie and justify it?” Maybe. She could just turn herself in but NO! The movie doesn’t even want you to think of that. She has to keep binding her breasts together and covering her body in dark baggy clothes because the sad man needs to be less sad. But most importantly, she doesn’t want to go to prison. But really, don’t you want the sad man to be less sad? Then stop thinking about morality if you’re already invested in the story. And we as mere observers become so invested with Lindon that you really want this bonding to work out.
Julia Ducournau has proven to be a ballsy filmmaker with insane concepts with this and her previous film, Raw. With both, she manages to make their off putting leads with unusual fixations compelling to watch thanks to how uncompromising they and the world around them were. Titane, in particular, is a movie that pushes boundaries in new places and will leave you stunned by the guts that it has to go there. It’s a movie that starts off equally extremely horny and gleefully transgressive with the car fucking, Rousselle’s nude body being a welcome constant in its first half, her also welcome non-car love scenes, and the violence. But it shifts tones to become a more reserved but still unusual drama about a found family. Admittedly, its first half hour is the peak for me but it still makes for a compelling character study once Vincent Lindon enters. Titane is one of the highlights of the year because it takes big swings and succeeds. I’m realistic in understanding that this won’t become a massive box office hit. It’s too weird to grab such a big audience and the fact that I was the only person in my showing proves that it’s not going to attract everybody. However, the people who are willing to give it a chance will be rewarded with a very unusual but memorable experience.

I am giving Titane a 4 out of 5 Hairpieces!