The essence of family seems to be creeping into big budget films lately. There have been countless memes connecting the word to the Fast and the Furious franchise. Those specific ones are hilarious since, what once was a sincere part of those films, has now become a punchline. In Marvel’s Black Widow, it is used to reduce to coldness of the title character, who was trained to be a heartless killing machine. Does it work? Are people in for a treat after waiting two years for Marvel’s new entry?

In the film, which takes place after Civil War, and before Endgame, Natasha Romanoff is a fugitive on the run, separated from her Avengers pals. This brings her face to face with her “sister” Yelena Belova, who she hasn’t seen since both of them were taken and separated at “The Red Room” when they were kids. While Natasha escaped, Yelena was subjected to all the cruelty of the program.   They only share the title of sisters, since they were part of an undercover operation gone bad when they were children.  Their “parents,” Alexei and Melina, were the closest thing the two girls had to a real family. Part of the program is placing the girls under literal mind control. In the beginning of the film, Yelena has discovered a way to surpass it. In order to take down Dreykov, they must find the undisclosed location of the Red Room. Their parents worked under Dreykov, Melina worked in the science division, and Alexei, worked as the muscle, so they know how to find it. He, like Captain America, is a super soldier, referred to as “The Red Guardian.” Unfortunately, Dreykov betrayed his trust, and promise of a better future, by throwing him into a high security prison.

As stated above, the family dynamic is not a punchline here, but the film’s greatest strength. That is thanks to the actors that director Cate Shortland surrounds Johannsson with this time. All three of them are conflicted characters that are fleshed out by the actors. Emotion is something that shouldn’t be felt in the chaotic world that they live in, but you do feel the love that these two have for their pseudo daughters.   Melina’s piercing green eyes convey so much emotion towards the staged family.  Rachel Weisz does an admirable job as a mother torn between alliance and motherly love. Stranger Things David Harbor, despite having a more solid physique, is a softy at heart who is as lovable as he is brawny. The actor is so much fun to watch as a man whose wit doesn’t measure up to his robust nature. The real star here is Yelena, played by Oscar nominated actress Florence Pugh. Yelena’s emotional journey is as good, or maybe better, than her leading lady’s. In fact, this feels more like an origin story for her, who now will take the baton as the title character, since we all know what fate lies ahead for Natasha. While Natasha was either a pre-teen or in the early stage of adolescence, Yelena still had the naïve nature of a child. This in turn, created a much more difficult obstacle to let go of something that clearly meant something to her.  Pugh, with so much ease, displays the perfect balance of badass action star and conflicted character. Oh, she also is damn funny too with her pointing out something that Natasha does throughout the Marvel Saga. It is a cute gag that Pugh perfectly runs with throughout the film. 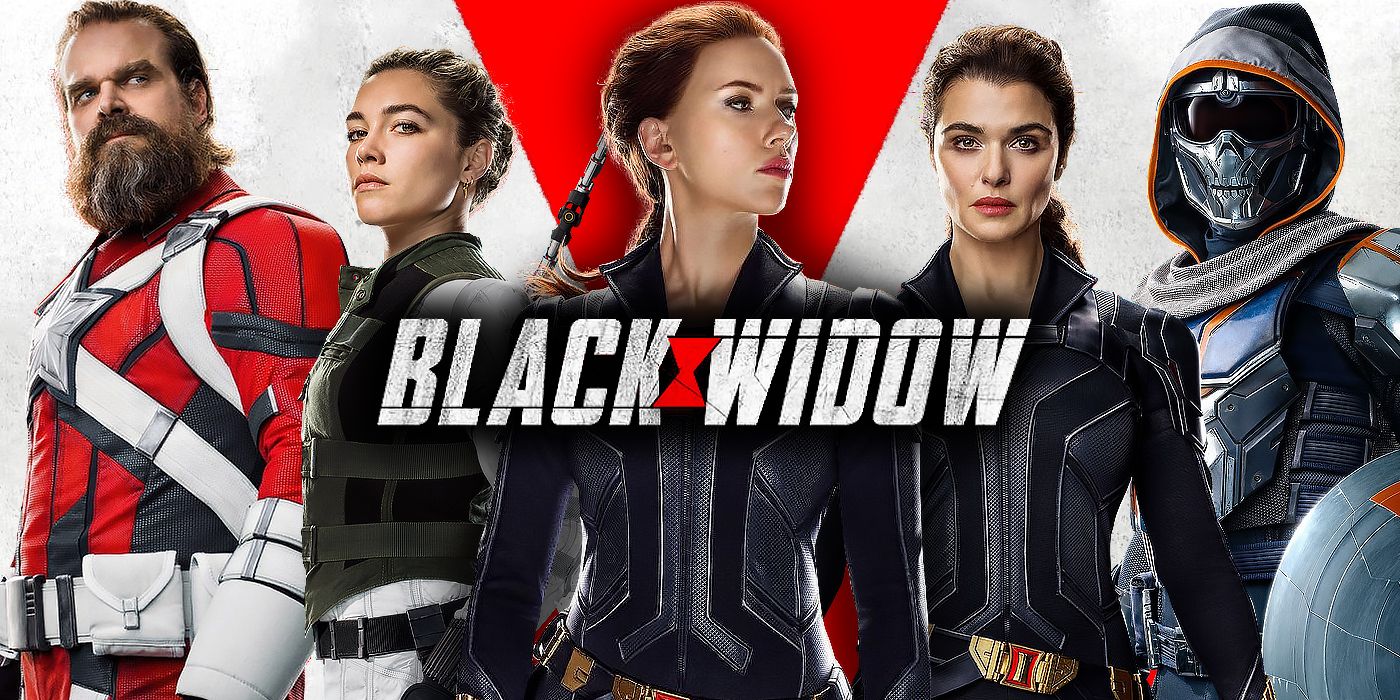 The film starts to lose momentum when it starts to fall back onto the standard formula of Marvel cliches. Dreykov, played by Ray Winstone, is a standard villain drunk with power and ego. Winstone does a serviceable job, but he is nowhere near as interesting as other villains such as Thanos or Loki. Other than Dreykov, the other baddie is a masked villain named, Taskmaster. The character, who has a threatening and unstoppable nature, reminiscent of Jason Vorhees, wields a shield, like Captain America, that adds a terrifying fierceness to the character. All this discussion about the surrounding cast of this film is what is ultimately a big flaw of it. Black Widow has never been an interesting character, even though she is played by a Johansson, who is more than a capable actress. This case against the character is amplified here with the supporting players being more interesting than her. If there was any time to make her feel more accessible to the audiences, this would’ve been it. Unfortunately, Natasha feels like a side character in her own film.

Black Widow is a worthy entry into the series. Unfortunately, some people won’t be impressed with it, since it is much more intimate after the adrenaline rush of Endgame. Outside of the limpness of Natasha’s character development, the surrounding cast is fantastic, and some of the action is worthy of a trip to IMAX. The real stars here are both Harbor and Pugh, who will now be Widow. She is already much more interesting than her predecessor, which will help in her future outings as the character. Either way, this is a notable return to both the MCU and the theater going experience.