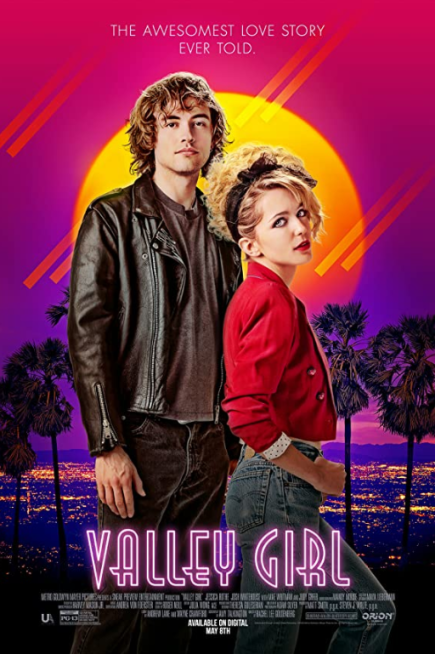 It was incredibly jarring to see Alicia Silverstone, who played Cher Horowitz, in the 1995 teen classic Clueless, be the mother character in this film.  Silverstone, who plays the older version of Julie, is offering relationship advice to her heartbroken daughter through a story about her days as an 80’s California teenager.  Julie is young, pretty, popular, and is dating the stereotypical blonde, All-American douchebag, Mickey Bowen, played by internet sensation Logan Paul. She feels more like an accessory to Mickey than a girlfriend. A whole new batch of feelings start to arise when she and her friends go over the hill to Hollywood, where she has a run in with rocker Randy, who is the spice to her sugar. The two come from two very different worlds and are on different life paths. Will they work out?  I think you know the answer

The answer isn’t important here. The screenplay by Amy Talkington, along with the direction by Rachel Lee Goldberg, is just an excuse to play dress up and sing these memorable 80’s songs. Rothe, who added much charm to the Happy Death Day films, once again uses her sunny disposition to make this film somewhat enjoyable. Even though you have seen this story played out hundreds of times, you can’t help to smile when she is on screen. She is so damn likable, even through Julie’s most eye rolling adolescent moments, which there are plenty. The covers of famous songs such as “We Got the Beat,” “Take on Me,” and many others, are amateurish. All these renditions are sung with an extreme amount of auto-tune. This in turn, makes the film feel like you are sitting in a karaoke session with your coworkers or best friends, where only a select few can actually truly sing. 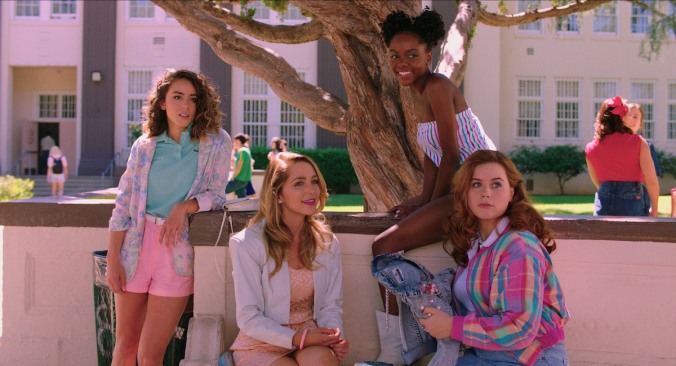 What this film’s most powerful strength is that it is void of any type of cynicism.  The light-hearted nature that was present in those films, close to 40 years ago, is rightfully on display here. Yes, there are moments of conflict, but they are outweighed by the moments of an extreme happiness and optimism. The surrounding cast adds levity to what the film is going for throughout the film. Judy Greer plays Julie’s overprotective suburban mother and Mae Whitman injects her fierceness into Jack, Randy’s bandmate and best friend. Both Josh Whitehouse, who plays Randy, and Rothe do a respectful job selling their star-crossed romance. They both just give enough of themselves to Julie and Randy to make their story meaningful. The real surprise here is Logan Paul. Not only does he look like the assembly line 80’s dude, but he does provide a decent performance as the selfish, idiotic, and unappreciative boyfriend. People have said that he is playing himself, but the star has a convincing film presence when on screen that has nothing to do whether or not he is indeed an ass.

Valley Girl is a film like that you can’t criticize too harshly. Is it an extremely predictable and has assembly line type feel? Of course, but it is also harmless that any flaws can be overlooked. This is also thanks to the cast, who lean into the cheesiness and never act like they are above the material.

I am giving Valley Girl a 2.5 out of 5 Hairpieces!