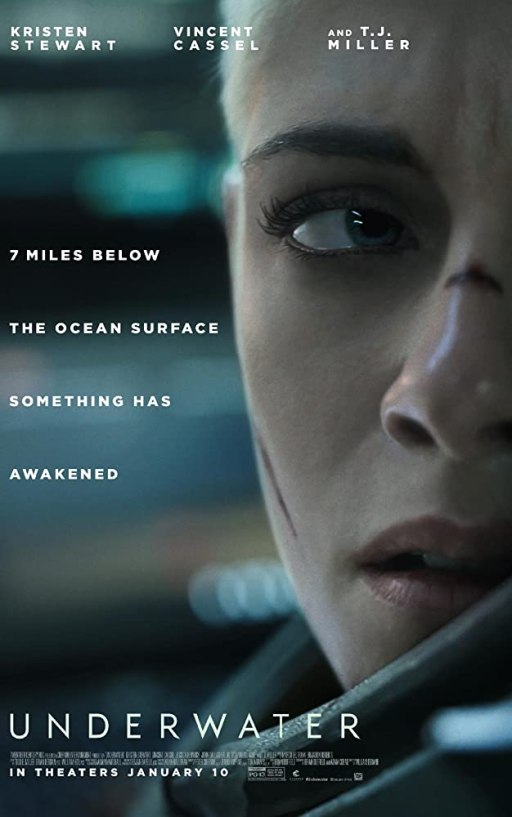 The oceans occupy 71% of this planet. As humans, our knowledge of what is down there is limited. Over the years, scientists have deep dived and discovered many unknown organisms. We have always been concerned about life from the above, but maybe we should be as concerned with what lies beneath us. That is the plot of the sci-fi film, Underwater. Does the film do something interesting with this idea or does it sink?

The Mariana Trench is the deepest trench on Earth, with its depth measuring a little over 36,000 feet. Here is a cool fact, if you were to place Mount Everest at the bottom of it, the peak would still be 7,000 thousand feet below sea level. In this film, a research and drilling facility, Kepler 822, has a made its home at the bottom of Mariana. Norah Price, played by Kristin Stewart, is a mechanical engineer, who informs us that the concept of time begins to fade when you live far away from sunlight. Soon after, a violent earthquake rocks the facility, killing many fellow employees. Price begins to think of a plan to escape back up to the surface with her Captain, W. Lucien, and the select few who survived the quake. What starts off as a normal conflict of “man vs nature,” soon evolves into “man vs whatever” that’s stalking them down below.

The film does kick off with an impressive set piece with part of the facility being overrun with unrelenting amounts of water. Director William Eubank’s direction here is fierce, vicious, and unforgiving. You feel the urgency of the scene. For the first 30 minutes, Eubanks does create a decent amount of mystery and dread. Stewart, crew cut and lean bodied, properly guides Norah through this unfortunate scenario. The actress’s normally confused look is befittingly applied to the character, since both she and the audience slowly discover what horrors are down there with them. For those who are looking for great glory kills, the film does provide memorable moments of gore. 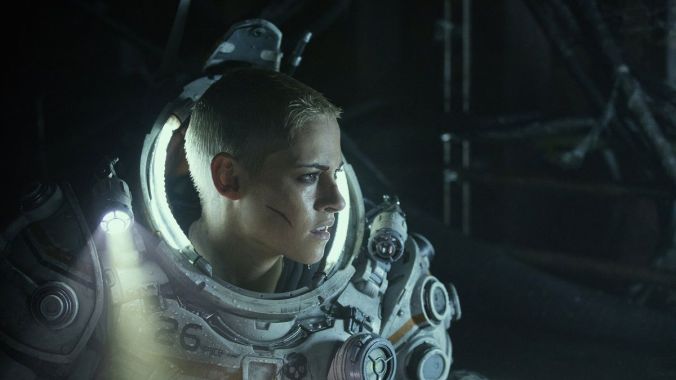 While it is nice to see actual violence, without a cut away, cinematographer Bojan Bazelli makes it near impossible to appreciate this world. It is one thing to envelop a world in darkness, and another to make most of what is going on difficult to see.   Eubank’s desire for the audience to experience what the characters are going through, is an interesting idea, but distracts a lot more than it should. The experience is reminiscent of the infamous battle from the HBO show Game of Thrones, where many viewers complained about how hard it was to see what was going on during a pivotal night battle. Stewart is surrounded by a team of decent actors, outside of T.J. Miller.  Miller, who always shows up to lay down the sarcasm, is quite irritating here. First off, most of the humor, written by Brian Duffield and Adam Cozard, is unfunny dialogue that no actor could make work. Second, Miller’s delivery is loud, showy, and unnatural.

Unfortunately, as mystery starts to unfold, anything positive in Eubank’s decisions start to unravel. It starts to become a film that you have seen dozens of times before and done a whole lot better. Stewart though keeps this afloat with a decent performance and the heroic nature she gives Norah. It’s a performance that keeps this film somewhat tolerable.

I am giving Underwater a 2.5 out of 5 Hairpieces!

We’re back to announce the next #PhellasGiveAway . Check out the video below on how to enter in the contest and we’ll be back on July 19th to announce one random winner.
Prisoners are taken to a remote island where they are given experimental drugs in Joseph Kosinski’s 'Spiderhead.' Chris Hemsworth and Miles Teller star in the film, now streaming on @netflix . Check out our review now! #Spiderhead #MovieReview #netflixreview https://youtu.be/N5LePJYlGCg
Those wild hound dogs Logan and Henry take a trip to the heartbreak hotel and review Baz Luhrmann’s @elvismovie , starring @austinbutler and Tom Hanks. #ElvisMovie #Elvis2022 #MovieReview https://youtu.be/ukV8Q-MxOjk
Those CinePhellas Kevin Muller and Nile Fortner take a trip to Atlanta. In this review, @kevinmuller5 and @nile_fortner discuss Season 3 of @atlantafx such as the best episodes, the show becoming Twilight Zone-ish, the cast taking the story overseas to Europe, and more!
My Tweets