It has been 27 years since the events of the first film. Six out of the seven children, who called themselves “The Losers,” have moved on from the hometown that established their friendship. Bill, whose brother was killed by Pennywise, is an author whose endings always fall short. Richie, is a stand up comedian whose alcoholism is one of the many problems that plague him. Eddie, has grown up to be who he was as a child, a nervous nelly who works in risk management and seems to be in a marriage that is reminiscent of the unhealthy codependent relationship he had with his mother. Ben, the fat hopeless romantic from the first film, has become a buff and successful architect who still pines for his childhood crush, and sole female member of the Losers, Beverly. Unfortunately, her abusive life did not end when she left her father to move to New York City, but only has continued with her equally as horrible husband. The most quiet and gentle Loser, Stan, lives in a giant New York City apartment with his wife. The six of them have forgotten everything that happened with the clown once they left the town. Then there is Mike, who never left, and has been obsessed with finding out everything about the clown they thought they killed. When the murders start to happen again, Mike calls all of them to come back and fulfill their promise to finish the job once and for all.

First, and foremost, the film succeeds with the adults due to the allowance of gore, language, and overall adult themes.Despite this being the adults’ film, the kids still appear here in more than just cameos. They are used to reconnect them to the town through memories. These memories are an expansion of the horrors Pennywise put them through in the original film. Once again, the casting here is spot on with the adult versions being as good as their children counterparts and individually on their own.   James McAvoy portrays Bill’s guilt quite nicely. His journey is so well done and the final confrontation with his guilt is one of the movie’s highlights. Funny man, Bill Hader, was the perfect choice for the older Richie. Yes, he has some hilarious lines, but also captures the emotions of loss and hopelessness quite nicely. The film will open even more doors for the former Saturday Night Live comedian. The other big-name star, Jessica Chastain, gives the older Beverly, originally played by Sophia Lillis, a worthy performance for someone who doesn’t usually appear in big budget productions. Let’s forget Dark Phoenix ever happened. The other lesser known players who portray the other losers: Jay Ryan, Andy Bean, and James Ransome, are all perfectly cast to pick up where their younger counterparts left off. Ransome’s Eddie and Richie still have the back and forth verbal battles that Finn Wolfhard and Jack Dylan Glazer did so well in the original. Fans of those two characters will be happy that Hader and Ransome continue the ball breaking tradition. In Chapter 1, Chosen Jacobs, who portrayed Mike, was kind of left to the wayside as far as character development, but Isiah Mustafa honors the character as a man who never left the prison that is Derry. He is a man full of every negative emotion that the others got away from when they left.

The real performance here that you are curious about is the return of Bill Skarsgard as Pennywise. He hasn’t lost a step, but most of his performance is through digital effects. As with the last film, it takes away from the horror of any scene that overuses it. There is a scene in the trailer, you’ll know when you see it, that totally loses momentum when you see it fully in this film due to the ridiculousness of the special effect applied to Pennywise. When Skarsgard is there in the flesh with the actors, his scares are warranted. Unfortunately, most of the time we see Pennywise is through the use of effects that robs the threat that is built up in each scene. If Muschietti had found practical ways to film certain scenes, the threat of Pennywise would’ve felt a lot more serious. Still, this is a performance that Skarsgaard will be remembered for and many will enjoy when watching the film.

Muschietti, who is about the helm the next Flash film, goes bigger in this one. For those of you who read the novel, the Ritual of Chud has been tooled to fit within in this movie and is a worthy substitute, since filming what happens in the novel would both confuse most of the audience members and be almost impossible. As with Skarsgaard, Muschietti works so much better when he must do everything in a practical way. Scenes like the funhouse mirror scene are so brilliantly directed that you can overlook the hiccups that the other parts of the film may contain. Since the child actors have grown up quite a bit since filming the first one back in 2016, the new technology of de-aging actors, which will be seen in the upcoming film The Irishman, is used here. The result isn’t that terrible, but you can definitely see who needed it the most through both face and voice, but the child actors are so good individually and as a whole that you won’t be bothered by it too much. 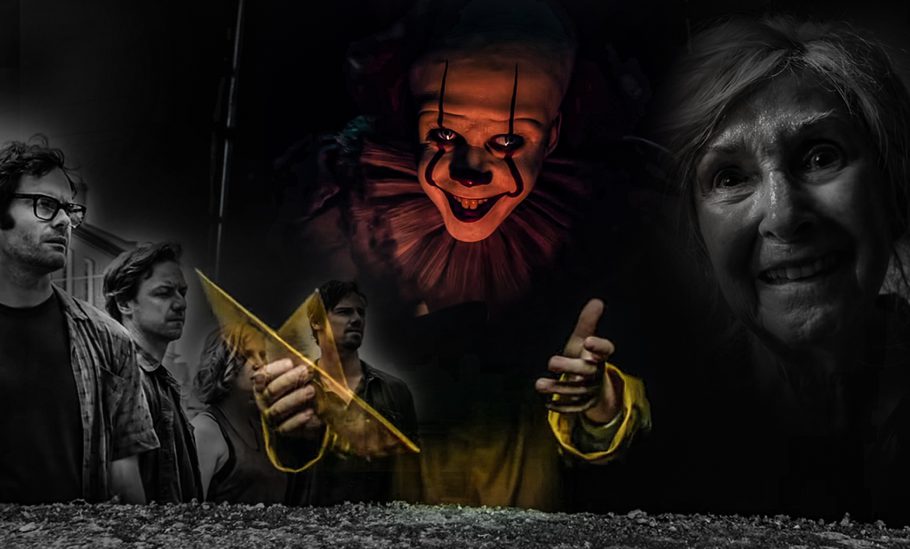 The director has said the original ran about four hours and they cut about an hour and fifteen off of it. Yes, this is a close to three-hour horror movie, something that is unheard of. Personally, I was intrigued by what was going on, due to the direction and performances, but some may have trouble sitting through it. That said, you can feel some editing and pacing issues. The phone calls that Mike makes felt incredibly rushed, and the character of Henry Bowers, played so well in the first one by Nicholas Hamilton, feels a bit off. Teach Grant, who plays the older version of the character, is a both too hammy and feels more tacked on than an organic part of the story. It will be interesting to see what Muschietti brings to the Ultimate cut of the film, which will create a narrative like the book which went back and forth, in narrative, with its characters.

IT: Chapter 2 despite some questionable effects, is a damn good time at the movies. It’s a horror epic that has a great cast, good direction, and honors the feel of the novel.

I am giving IT: Chapter Two a 4 out of 5 Hairpieces!