Brightburn tries to present something that surprisingly hasn’t become a movie in this superhero-obsessed culture we now live in. What if Superman was evil? There’s a lot to do with this premise as villains are usually more interesting than the heroes in terms of their backstory and motivations. The movie follows Brandon Breyer, a seemingly perfectly behaved young boy who deals with new feelings and emotions when he turns 12 after he develops superpowers out of nowhere. Things get tense in the town as Brandon begins to cause trouble by attacking other people with his powers.

Meanwhile, his adopted parents begin to wonder what to do about his behavior while attempting to keep some secrets about Brandon’s identity from him. The parents seem to know more than what they’re willing to tell due to an eventful first meeting they had with Brandon before they took him in. Brandon’s behavioral change causes friction in the household while he discovers these aforementioned secrets on his own. While director David Yarovesky and writers Mark and Brian Gunn (brother and cousin of writer/director James Gunn, respectively) don’t exactly get as deep as they could with the premise, they take the unusual choice of turning this into a very entertaining slasher movie. While this particular choice does make the movie more conventional than what could’ve been, the movie offer some well executed sequences filled with tension that make for a solid experience.

Brightburn is one of those movies where when you’re watching it, it’s a blast and you soak it all up because it’s satisfying in the most surface level, crowd pleasing way. But there’s nothing wrong with that. A lot of slashers aren’t made to make a grand statement about life, they just attempt to entertain you by grossing you out, making you laugh, or scaring you. As long as you get some kind of reaction of some kind by the end, then it’s a success. When it leans into being a slasher movie, it has a fun B-movie feel to it. The kind of B-movie that a kid would be at peace watching at 1 a.m. when their parents are sleeping. It goes pretty far with the violence at times and it felt refreshing for the kind of story it was telling. The individual scenes where characters are being stalked by Brandon have a creepy atmosphere and the movie uses this to make the audience squirm in their seats any way possible.

The level of effort put into the production of these individual scenes makes the movie more effective in its intensity and suspense. The character of Brandon Breyer feels more intimidating as a result of these scenes and the actor playing him, Jackson A. Dunn, helps sell it. In some of the less intense moments, it tries to make a case for how creepy this kid is because he says things in an eerie way while staring at people eerily. It works because this is basically Superman if he became a Jason type of killer and the way the scenes are set up create an eerie tone. Brandon’s arc is perhaps too thinly written as his turn from an everyday normal kid to a psychopath alien being with superpowers comes way too fast to really buy how it happens. You could make a case that this is an allegory for puberty and it’s lightly touched on. But it’s clear that the movie’s more concerned with being a slasher movie with some cool scenes than being Eighth Grade with a focus on superpowers standing in uncontrollable boners and teen angst. 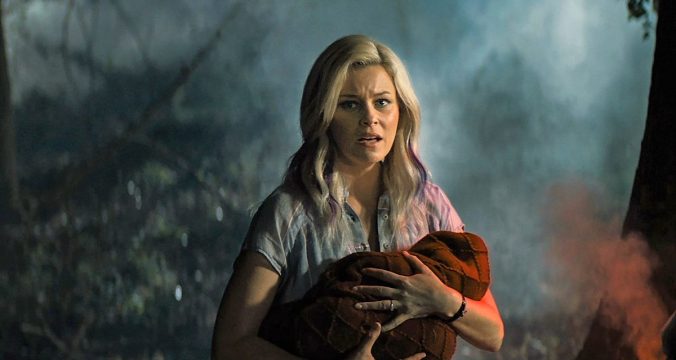 Elizabeth Banks is wonderful as Brandon’s adoptive mother, Tori. While most of the movie is dependent on thrills and suspense, she provided some warmth to the movie. Acting as the one person who stands behind Brandon no matter what, Tori added a sympathetic shoulder for Brandon even after his personality changes. Banks helps to add some welcome dimensions to her relationship with Brandon. When the movie is missing its emotional resonance elsewhere, she provides it during the movie’s calmer moments. Her character’s motivations seem reasonable and sound, but even she starts to feel conflicted on what to do with her son. Probably any parent will relate to what’s she’s going through. David Denman is good as Kyle, Brandon’s adoptive father. Denman doesn’t have as much to do compared to Banks, but his character was still good for the amount of time he was on screen. Kyle’s is more direct towards Brandon about his behavior and wants him to cut it out, creating some nice tension. A lot of the other characters are mostly dead meats rather than fully fleshed out characters. Much like any slasher movie, which this movie is more interested in being and I’m totally okay with it, they’re just there to show off how much of a force Brandon can become.

I wish there was more about Brandon’s backstory as his turn to being a villain comes out of nowhere as the movie makes a big point to show he’s a good kid prior to him getting his powers. Again, if the movie wanted to make more of a point that this tied to his puberty, then they could’ve made the whole movie a character study or focused more on his school life. We see Brandon getting bullied at school but the movie never uses that to its advantage. Being that this is a Superman analog, they could’ve taken advantage of the idea of him being an outcast the way a lot of Superman origin stories often present. Seriously, some of these kids could’ve been more slasher fodder and they would’ve made sense to die if they wanted to show much of an outsider he was and how frustrating that feels in this small town. Instead, the only other peer that’s truly developed is one girl who’s really nice to Brandon until he gives her a legitimate reason to find him creepy. Even then, some of that character is just an excuse to show off his powers rather than someone for him to create a true relationship with, whether it be good or bad. There’s also some missed opportunities when it comes to the other small town residents and how they feel about Brandon before and after his change. The other residents in the small town get overshadowed as most of the people killed just because the movie needs a kill count. There’s a random character who enters one scene just to make a joke about Brandon being weird and that could lead to something but nope.

Where the movie probably falters the most is in its last act. It’s clear because there’s no other character or any kind of force to bring conflict against Brandon, it becomes clear that it doesn’t have any direction in where the movie is going to lead to. He’s already evil and that’s pretty much all the movie has going for it in terms of a conflict. There’s the stuff with Brandon and his parents, but it’s not developed enough to have as much of an impact as it could. The kills start to slow down and most of the climax comes off as more of a VFX reel than what could’ve been a gratifying action sequence. It’s kind of cool but gets dull really fast. It does offer a nice cameo at the end though.

Those who might have the slightest interest in superheroes or super-villains will probably get their fill of what this movie is trying to offer. As a slasher movie, it’s a lot of fun if you like gore. Acting wise, everyone’s doing their job, but Banks is definitely the standout. As long as you don’t think too much about the issues with the story, you might enjoy yourself. Even with its shortcomings, it’s always got your attention. It’s worth watching if you want something intense and suspenseful that will grab your attention for the majority of its run-time.

I am giving Brightburn a 3.5 out of 5 Hairpieces!