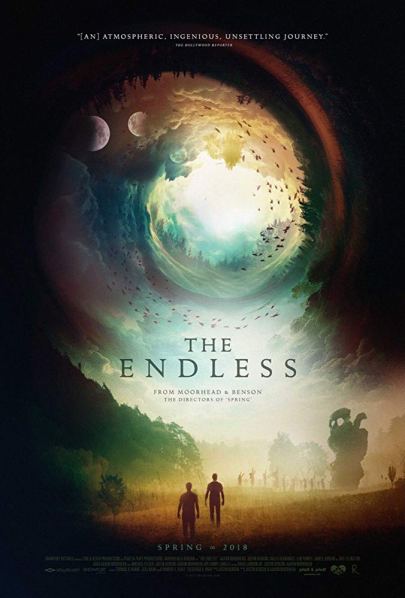 A few years ago there was little sci-fi horror flick called Resolution, the first film from filmmakers Justin Benson and Aaron Moorhead. I checked it out recently after realizing it was a semi-prequel to their latest work, The Endless. Resolution was a strange, slow-burning movie that revealed itself to be based around dealing with repeating time-loops and the blurring of each new reality. I enjoyed the film, but I did not come anywhere close to understanding it. By contrast, The Endless not only expands upon these ideas, but gives greater context to what’s been happening across both films. It’s still strange and confusing, but in a more digestible way.

The film follows two brothers, Justin and Aaron Smith (played by the two directors hence the same names) who ten years ago escaped Camp Arcadia, a compound in the California Desert where a group of people worship an unseen entity. When the brothers receive a videotape from Camp Arcadia talking about ‘The Ascension’ Justin – who only has memories of a UFO Death Cult – believes it to be proof of a mass suicide while Aaron – who still remembers a happier time with the camp – takes it to mean everyone is still alive and wants to go see everyone again. Despite his better judgment, Justin takes Aaron back to the camp.

Upon arrival, Aaron finds the freedom of the camp new and exciting, the fears of a death cult extinguished by good food, clean air and a pretty camp member called Anna (Callie Hernandez). However, Justin is less convinced and notices a lot of odd behavior, more than just the culty nature of the whole thing though camp leader Hal (Tate Ellington) hopes his returns allows him to keep an open mind. As one day turns into several, Justin becomes convinced that the unseen entity the camp worships is following him with malicious intent, exploring further outside the camp in the surrounding area he finds several groups all giving him the same warning. Get out before it’s too late. 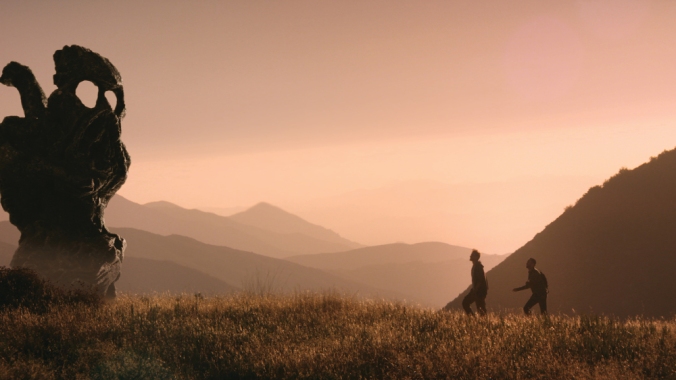 It is difficult to go into much detail on the plot because while it is another slow-burn, the reveal of time-loops manufactures itself in a very different way than you might expect. Given the brothers’ history with the camp, they’re more open to the possibility of an Entity, of its powers over time and space, but being openly confronted with it is a terrifying experience. The tie-ins to Resolution make that film a mandatory viewing not only to give better context to some smaller details, but to lend credence to the film’s sense of unease when Justin comes across a familiar scene from the first film. It’s a plot that on the surface that doesn’t have a lot happening, but underneath there’s a great deal happening, and could warrant several viewings to fully catch everything that’s happening just from how much Justin knows about the cult to potential Lovecraft connections.

The acting was good, but not the film’s primary focus. Nobody gave a bad performance but this was definitely more a case of building the world and the situation around it, rather than characters reacting to their world. Brothers Justin and Aaron both play very differently, but present an interesting juxtaposition to each other. Justin as the older brother is often in charge of them both but his cynicism holds them back, either refusing to believe what he’s told or ignoring everything around him because it doesn’t make sense. There’s hints that Justin is fully aware of the time-loops, but has either forgotten or repressed the memories since leaving, the way he talks about the people in the camp, what “The Entity” is, or isn’t given a subtle indication that he’s aware something has happened. Without proof, his rational mind can’t accept it and a big part of the second half of the film is Justin being inundated with impossible proof and told to accept what’s really going on.

Aaron conversely is a much more simple-minded guy, enjoying the little things the camp has to offer like decent food and the chance to do as you wish. In truth, Aaron doesn’t factor into the story as much as Justin, but there’s an innocent charm to him that’s somewhat endearing. For example, how he’ll sometimes misinterpret things like believing sleeping with someone to literally mean sleeping beside them – though if you think about it, the childlike mindset he has gives an uncomfortable feeling that he might have had dealings with the time-loops before and was never able to grow mentally after leaving. Both Justin and Aaron deliver a solid brotherly relationship, they don’t always agree, there’s plenty of times both are sick of each other, but it’s when they come together that you believe these two have each other’s backs. 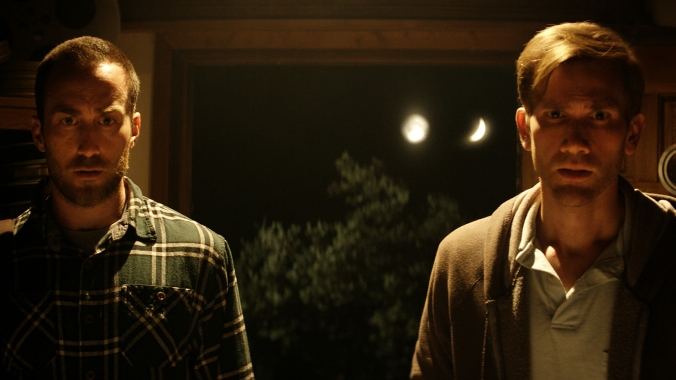 The supporting characters aren’t given a lot to do, but they do help flesh out this universe. Within the camp, the main three members were Hal, Anna and Tim (Lew Temple), Tim was the camp brewer with their beer being a source to make money and while seemingly a quiet sort, he clearly knew more than he let on, and seemed uncomfortable letting Justin and Aaron get too close to a very real danger. Anna, while initially being built as a love interest to Aaron, isn’t given a whole lot to do but her interactions with Aaron provide him with the first real sense of comfort he’s had in years. I’ve seen some theories about who Anna really is and I kinda buy into it with what’s established with the time-loops. And Hal manages to toe the difficult line between cult leader and genuine friend. He’s never called himself the leader, but it’s his voice people look to for guidance and his upbeat, forgiving attitude allows the camp to play down the sinister aspects of being a cult. But again, he knows more than he’s letting on, and you never really know where you stand with him.

Outside the camp, other than a couple returning characters from Resolution, there was a seemingly insane hermit called Carl (James Jordan) who provided the film with some much needed exposition, but also some pitch-black humor given that he was fully aware of what was happening to him, and his attempts to work around it. Carl was a rare case of the comic-relief character actually being plot relevant and his madness standing out amongst this crazed story says a lot about how well he comes across in the film.

Both Justin and Aaron take on directing duties as well and even with a relatively low budget, they manage to craft something quite impressive. Even though it does have some iffy CGI moment in the third act with some fire, but otherwise this is a tight, well-polished flick that cleverly keeps a grounded approach to its high-concept premise. The decision to make the characters aware of the time-loops meant they didn’t have to waste time explaining it all. Instead the film put a focus on the effects of being stuck as opposed to getting there in the first place, and some of the loops we see are horrifying with a man in a tent getting the absolute worst of it all. While not particularly scary in the traditional sense, Id’ still class this as a horror film due to its unnerving atmosphere. The more Justin and Aaron try to uncover exactly what’s going on with the Camp, and “The Entity,” the more they’re forced down a path filled with nightmares and questions. Even with the rules of the time-loops set up (if not totally explained) it’s never revealed who, what, how, or why any of this is happening, and it leaves you feeling that much more uneasy trying to wrap your head around it.

The lower budget also gave Benson and Moorhead the necessity to use a “less is more” approach and the film’s all the better for it. The ending shows a little too much for my liking, but it doesn’t ruin the film – since “The Entity” can’t be seen, we’re never subjected to a tangible evil. This isn’t something you can close your eyes and hide away from, it’s always there, and if certain scenes are to be believed it’s right in front of our faces more often than not, there’s something quite unsettling, and the film plays it very well. I feel like this film deserves a second viewing because once you realize what’s happening and how “The Entity” acts in the later parts of the film start working towards that sense of unease and confusion. I feel going back with full context will add to the start of the film and how Justin and Aaron’s return to the Camp factors into the overall mythos of the film.

There’s something quite special about The Endless, time-loops are nothing new, but the way this is able to use them within the story (retroactively making Resolution a better film as a result) and creates this distinct universe and spiritual evil is worthy of praise. I do wish more had been done for the characters, but Justin and Aaron play a strong brotherly pair and there’s enough confidence in the concept to make the film work.

I am giving The Endless a 4 out of 5 Hairpieces!