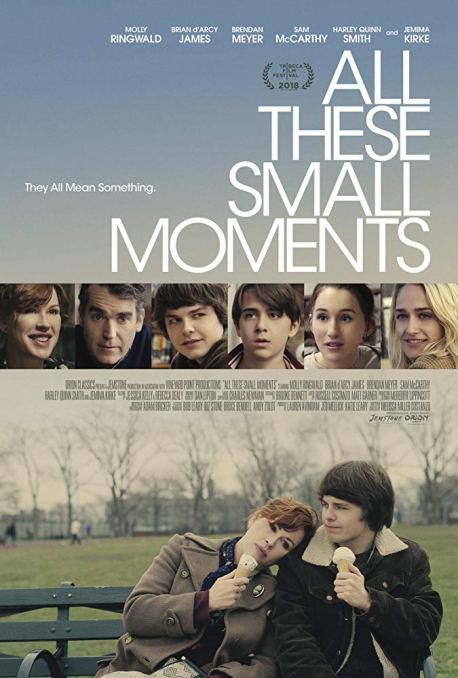 Molly Ringwald is back with a talented cast that includes 2014’s The Guest star Brendan Meyer, Girls TV show star Jemima Kirke, and director Kevin Smith’s daughter Harley Quinn Smith, in Melissa Miller Costanzo’s directorial debut.  Costanzo, who has worked in the art department for such films as The Fighter and Precious, gives us a look at young Howie who has had a rough year. He broke his arm, he along with his brother have to deal with their parents unraveling marriage, and the only thing that keeps Howie going is his love for a mysterious woman.

All These Small Moments follows teenage Howie (Brendan Meyer) having to deal with his parents’ crumbling marriage and he bonds with a blonde girl (Jemima Kirke) while on the bus.  The drama film does follow some familiar film-making and storytelling beats of the boy meets girl type of story. However, this coming of age story offers characters that feel real, with real situations, and character development that makes a similar movie genre feel modern.

All of these characters are a little quirky, shades of grey, and these characters are the real powerhouse of the film. Howie is young, insecure, shy, and is deeply trying to connect with this girl on his bus route to the point where you’re heavily rooting for him to start a conversation. Teenage Howie has the hots for this girl on the bus named Odessa. She is in her 30’s, sells vegetables out of her garden, and she is going through a nasty divorce. Odessa seems quite flattered by Howie’s looks and quite possibly cute stalking. Eventually, Howie does work up the courage to confront Odessa, and the film hypes up this relationship that seems a little predictable. On the other hand, right when it’s starting to seem predictable, the film takes a different approach and catches you off guard. It’s a curveball for Howie, but it’s a life lesson that most people can relate to. 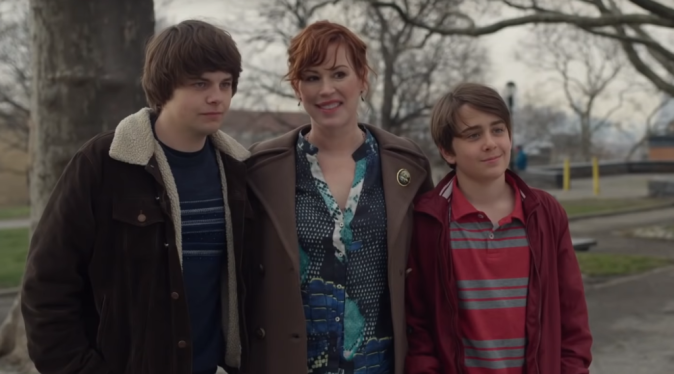 Even though Howie may come off a little quirky and bland at first, he is balanced out by the more vivid characters around him. Howie’s younger brother in the film, played by Sam McCarthy, brings a well-done balance of humor to the film. McCarthy and Meyer’s characters also show us what it’s like for young boys to experience their parent’s failing marriage. This shows us what it’s like for kids to have to deal with this type of situation and how these young boys have to level up to a masculine maturity to deal with life at home. This is a unique take for these characters and it’s something we don’t get to see much in movies.

Odessa can be seen as more than just a crush by Howie, but a bridge between Howie’s parent’s emotional rollercoaster and Howie’s struggles. She is similar to Howie because she comes off a little shy. She is also like Howie’s parents because she has to deal with some serious personal issues as well. When we first see Odessa on the same bus route as Howie, she is crying and Howie is alarmed by this. The director is making a statement on how everyone has some type of emotional issue to deal with and that in life we meet people who have similar issues to us or ones we love.

Harley Quinn Smith, who I last saw in a film was a film I blasted called Yoga Hosers, redeems herself by giving a powerhouse performance in All These Small Moments. With Yoga Hosers, which was directed by her father and one of my favorite directors, Kevin Smith, Harley Quinn Smith wasn’t the problem. Here, she is giving good writing material and she is with a director that seems to have a good grasp on directing actors. Her character, who has a crush on Howie and she’s more age-appropriate, gives an emotional monologue about sexual assault. Honestly, the film could have done without the scene. It’s a little uncomfortable to hear, but even with that minor complaint, Harley Quinn Smith delivers some serious acting chops. This is my favorite and possibly her best performance to date.

This film is Howie’s story and is his story to adulthood feels better-rounded with his supporting cast members playing these characters. Howie is never pushed aside or to the back, it’s just that director Melissa Miller Costanzo understands the importance of building characters to build off from one’s character.

This is a script with a ton of well-done character development and each character is so well-written that you feel for them. Even though this film primarily focuses on the younger cast, when looking at Howie’s parents, Molly Ringwald as Carla, and her husband Molly’s Game and First Man actor Brian d’Arcy James, you can’t help but relate to both of them. In a majority of films like this, the husband who has lost his romantic touch could have easily been made out to look like a bad father or even seen as a villain for the film. But the film finds a good balance for him by presenting him as a man who has lost his way looking to get back. He says in the film, “It’s bigger than just marriage,” so he is presented in a way that he wants to protect his marriage, yet stay there for his sons, and romantically reconnect with his wife. Molly Ringwald, who was last seen in SPF-18 and as Amy in King Cobra, has always been a good actress, so no surprise there. However, this is a role that feels fresh for Ringwald and her dialogue is some of the most heartfelt pieces of the film.

All These Small Moments may offer a story with a similar song and dance, but it offers a modern take on characters that are certain to make it stand out. This is an indie film that is heavy on character development. This coming-of-age tale has heartfelt intimacy among the characters that lead to self-discovery for the viewers as well. Some of the comedy doesn’t really fit the film, but it’s beautifully directed, and written for a first time director that I’d like to see more from.

I am giving All These Small Moments a 3.5 out of 5 Hairpieces!