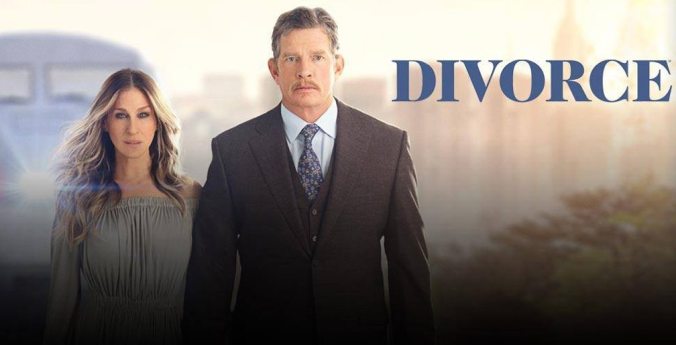 Divorce is an HBO series in which Sarah Jessica Parker and Thomas Haden Church are Frances and Robert, a couple who, after a strange event at a friend’s house, realize that they’re stuck in a rut in their marriage, causing them to divorce. Created by Irish actress/writer/producer Sharon Horgan of Amazon’s Catastrophe and IFC’s The Increasingly Poor Decisions of Todd Margaret and executive produced by Paul Simms of NewsRadio, Atlanta, and Girls, the series offers an unflinching look at what happens when two adults decide to get a divorce and the complications that come as a result while attempting to keep things as civilized as possible. The show is great at showing how different both Frances and Robert might have their faults, but no one is painted as an outright villain as the actors bring multiple dimensions to their characters, so that we can understand what they loved in each other and what made them break apart.

The first season mostly concerns how both Frances and Robert are dealing with their choices to divorce while also trying to keep up appearances. Sarah Jessica Parker is great as Frances, who is a lot more complicated than she seems given how well she’s doing in her professional life. In fact, she happens to be the breadwinner with her being a headhunter while also attempting to have her own art gallery. We see how as a result of having to reflect on where things went wrong in Frances’ marriage, things start to unravel while she struggles to keep it all together. It’s very clear though she’s somehow at fault as something recent she gets herself involved in serves as the impetus for Robert wanting to go through with the divorce, but the show is fair by showing how Robert might’ve have a hand in their current standing as a couple. Even still, you can understand where the characters are coming from even if you don’t always agree with their choices. Thomas Haden Church gives his contractor character Robert more to him as he seems unbearable and punchable at first glance but he, along with the writing, is better defined than that. While he’s shown to be capable at playing an antagonist in most of the movies I’ve seen him in, Church gives Robert a likable aspect to a character that would otherwise be insufferable. He also gives the character some interesting quirks due to his tendency to be blunt and somewhat dim that gives Robert some humanity. He manages to get the biggest laughs out of the season due to how silly the character can be and Church’s commitment to the role. For the most part, Parker and Church’s dueling gives the series some oomph and brings some tension to an otherwise low key show. In these moments, the show is at its best as the comedy and the drama really hit their marks. However, it does seem as if the show doesn’t exactly know what tone it wants to be as you’re not sure whether its main objective is to want to be a comedy or a drama. Sometimes, it’s not funny enough to be a comedy or it’s too silly to be a drama, so I’m not sure what reaction I’m supposed to get out of some of the moments presented here. It’s still entertaining enough to see it figure itself out all the way through as a lot of the characters are interesting to watch. Eventually, the show finds its stride by the end of the season as it builds more conflict with Robert finding a new investment while Frances attempts to open her art gallery, both of which are occurring while the divorce is still ongoing and attempts to create complications. It gets really addictive as the characters are constantly trying to keep the peace or one up each other, depending on the situation. Season 1 offers a solid dark comedy with some strong lead performances. 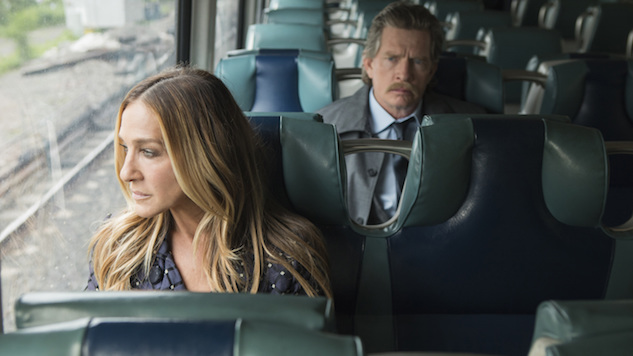 Season 2 seemed to flow better as we are more familiar with the characters and it seems that the show has a more comfortable tone as a result. It’s also a lot more hilarious this time around. To some, the changes, courtesy of new showrunner Jenny Bicks (Sex and the City and the underrated The Big C), might be a turn off for some, but it really gelled with me. What it might lose in prickliness and darkness, it gains sincerity and warmth in equal measure while somehow maintaining the brutal honesty that surrounds the show’s world and its characters. It’s a hard thing to balance due to the subject matter but they somehow managed it. Sarah Jessica Parker is still good as one of the leads. Even if her problems come off as first world problems, how she conveys her emotions throughout the many stresses she has to deal with makes her compelling to watch. For example, a recurring storyline features Frances trying to find an artist of a painting that she falls for in the event that she can present their work at the art gallery that has more heart and weight to it than I would’ve expected and she’s a big part of why that portion worked. I usually find Thomas Haden Church a prick in most things, but considering the aftermath of the last season, it’s hard not to find his character Robert sympathetic after all he has to go through. He was my favorite character the last season and I was worried that they would spin their wheels as his characters seemed to be hitting a lot of familiar beats as the first season progressed. Thankfully, they pivot and give him some new issues to work with that take the character in a new direction. Even the side characters are better defined like Molly Shannon as Frances’ enthusiastic best friend Diane, who’s a highlight of the season as she struggles to find her own way while working at Frances’ art gallery as well as dealing with her husband Nick’s (Tracy Letts) retirement and newfound appreciation for life. Dallas, Frances’ cynical psychotherapist best friend, played by Talia Balsam, is also great. Her moments with Dean Winters as a sleazy lawyer named Tony Silvercreek, are some other highlights of the season. The moments involving one of her clients, a real estate agent named Jackie, played by Becki Newton, who eventually gets chummy with Robert also gives Dallas some more meat to chew on. Newton is a fun addition to the cast as she’s very likable and charming in a role that yet again could be painted as an obstacle the other characters have to go through. But the show is smart enough to subvert that as she’s more layered than she seems at first, even if some of the layers you don’t totally know if you like. But like a lot of the characters, she’s a regular person dealing with her own stuff and the show doesn’t fault her for it. Even the children gets more to do as Frances has to deal with friction in her relationship with her daughter Lila, while Robert attempts to start a new relationship with that causes him to set some boundaries with their son Tom. The kids, Sterling Jerins and Charlie Kilgore, are effective as daughter and son, Lila and Tom, respectively, throughout the season as they manages to hold their own in their scenes. Season 2 effectively manages to fit a proper tone and stick with it and is all the better for it. It might lose some fans who preferred the drier and more British influenced first season, but if you want something that wears its heart on its sleeve, but somehow manages to hit you in the gut at times, then this is your show.

I really loved watching it all throughout as I zipped through these two very short seasons of television. It’s reminiscent of the kinds of HBO shows I usually enjoy like Bored to Death, Hung, or Girls. They’re usually under the radar in terms of attention, but they’re usually fun to watch in a half an hour due to the unpredictability and the uniqueness of the situations the characters find themselves in. What’s sort of different from those aforementioned shows is that this is more concerned with characters than actually having a big plot that carries over the season. Stuff kind of happens, but it’s not explosive or epic if that’s what you expect. The characters are very entertaining in their own ways. It’s an interesting slice of life that’s quick with its bite as it’s with its hugs and makes for a brilliant dramedy about the ugliness that comes with divorce.