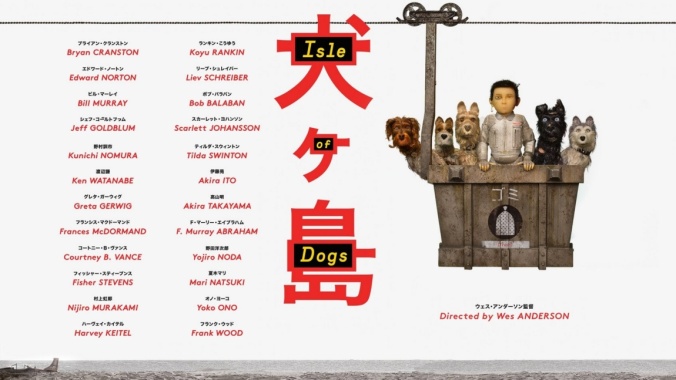 Simultaneously charming and depressing, Wes Anderson’s Isle of Dogs will find a way to stick with you long after the credits roll. While it might not reach the levels of Rushmore or Moonrise Kingdom, Anderson still manages to utilize his trademark style into a unique and entertaining experience. The movie follows a group of dogs in a dystopian future version of Japan and isolated by the evil new mayor on a trash island literally called “Trash Island,” after an outbreak of a dog flu virus in the city. When Atari, a young Japanese boy, gets stuck on the island while looking for his own dog, the other dogs agree to help him, including the cynical Chief.

All the dogs are cute and adorable if that’s something you’re looking for. Bryan Cranston is good as the lead dog Chief. He adds a lot of appropriate gruffness to the part. Even when the story is the typical emotional beats in, which we learn why he’s so grumpy, he sells those scenes well. Usually, it takes me out of these movies when there’s all these celebrity voices, but something like this actually works when the actors seem to actually care and are on the same wavelength throughout the movie, like Cranston is. The evolving relationship between Atari and Chief is effective because they find a way to develop it, despite the obvious language barrier. It hits a lot of predictable story beats, but it’s told in an effective enough way and Anderson is a strong enough filmmaker to illustrate it effectively enough to the point that the audience will care. Edward Norton has great chemistry with Cranston as another dog named Rex as they go along on their adventure. He’s basically like every other Edward Norton character from other Wes Anderson movies, but the fact that he was more optimistic than Chief does help to keep the dynamic between the characters refreshing. Jeff Goldblum is also fun as a gossip-loving dog, Duke, which is a nice running joke. A lot of the other other dogs don’t have as much to do, but they were a nice addition in the movie including Scarlett Johansson as a former show dog, and Bill Murray as a former mascot for the local baseball team. Meanwhile, Tracy, a young American foreign exchange student is on the case to uncover a conspiracy concerning the mayor. This is probably the weakest element of the movie as it’s not as engaging as the rest of the movie, but it works well enough to move the story along. Also, I can’t say that I care that much about the mayor because he’s a very one dimensional character that hates dogs. The rest of the human characters are similarly one dimensional, and not as memorable.

But where the movie works the best is the story with the dogs. It’s where the simplicity works the best. Now, talking dogs aren’t new, especially to animated movies, but it’s more unique here because the movie sells it with its development of the bleak and downbeat setting, which is weirdly soothing. While you might care for the dogs, you never feel too emotionally drained because there’s still an urgency to the mission that Atari and the dogs have to go on and as a result, the pacing picks up as the adventure keeps going. The narration by Courtney B. Vance also helps to move things along and he has a very commanding voice that just makes you want to listen to what he has to say.

As a whole, Isle of Dogs lacks the emotional depth that most of Anderson’s movies usually have, but I feel like that’s the point. It’s supposed to be cold and bleak because that’s the kind of world that’s developed for this movie. It does make it harder to connect to on a personal level. I can’t say that I was on the edge of my seat waiting to see what happens, but the animation and the voice acting is enough to keep you entertained. The fact that the film is animated, made Anderson want to make it more simple and I can respect that he wanted to do something different compared to the subdued insanity that was featured in his previous two movies. It doesn’t talk down to its audience, which is a unique combination with its stop-motion animation. The amount of work and the attention to detail put into the character design and the world they live in, was worth the long wait for this to be released in theaters. Even if this isn’t Anderson’s best, it’s an entertaining movie that will satisfy his fans, and those wanting something different as far as western animation goes.

The beginning of the end.... We're checking out part 1 of the final season of @ozark . Our full review will be up next week. #Ozark #OzarkSeason4 #OzarkNetflix #TVReview
The names’ Bond, James Bond. We’ve been reviewing the Daniel Craig era of @007 films and return to talk about the 23rd film in the franchise, 'Skyfall.' Directed by Sam Mendes, 'Skyfall' is an action-packed adventure with a great story and memorable villain, played by Javier Bardem. Watch our review now and let us know your thoughts on the film.
We reviewed the premiere episode and the fine young cannibals Logan and Henry are back to review the first season of the hit @showtime series 'Yellowjackets.'
The fifth movie in the @screammovies franchise was released over the weekend and we got a chance to go to the theater and check it out. Watch our review and let us know your thoughts on the film in the comment section below! We’ll be right back… #ScreamMovie #Scream #MovieReview https://youtu.be/CZq6sNyrmik
My Tweets