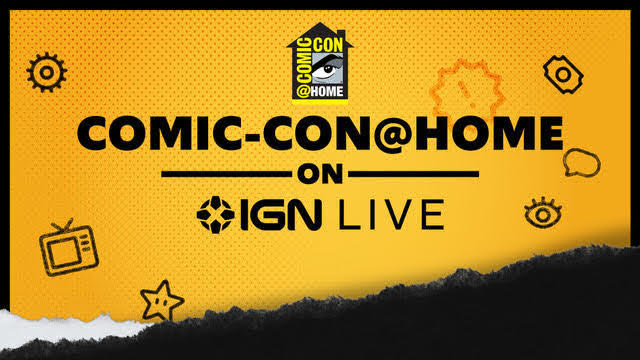 HBO’s Watchmen put forth the idea that “masks make one cruel.” On college campuses, many people, both students and non-students, have taken up virtual masks to make statements and take actions that would not be acceptable if done in public. Zoom bombing, doxing, and anonymous threats have caused much dismay, particularly as campuses move to remote learning due to COVID-19. Come hear what educators have to say about the power of masks and how Watchmen and other comics show us a path towards heroism or villainy. Panelists include Dr. Kalenda Eaton (University of Oklahoma), Dr. David Surratt (University of Oklahoma), Hailey Lopez (UC Berkeley), Robert Hypes (Phoenix Creative Collective), and Alfred Day (UC Berkeley).

IGN’s weekly variety show Up at Noon will debut an exclusive reveal for the upcoming SEGA game Yakuza: Like a Dragon as well as surprise interviews.

Star Trek broke barriers when it first premiered more than 50 years ago, inspiring people of all walks of life by championing cultural diversity, scientific advancement, and the exploration of new frontiers. Today, this legacy carries on through the Star Trek series on CBS All Access, where Starfleet and new characters alike take on exciting missions and explore uncharted areas of the universe while keeping true to the ideals of “Star Trek” that society needs now more than ever. Join us as we virtually bring together the casts and producers from Star Trek: Discovery, new animated series Star Trek: Lower Decks and Star Trek: Picard.

Join executive producer Eric Kripke, along with series stars Karl Urban, Jack Quaid, Antony Starr, Erin Moriarty, Jessie T. Usher, Laz Alonso, Chace Crawford, Tomer Capon, Karen Fukuhara, and Aya Cash, with moderator Aisha Tyler, for a behind-the-scenes look at the upcoming second season of The Boys. Executive producers Seth Rogen and Evan Goldberg will also make a special appearance. Based on The New York Times best-selling comic by Garth Ennis and Darick Robertson, The Boys is a fun and irreverent take on what happens when superheroes – who are as popular as celebrities – abuse their superpowers rather than use them for good. The even more intense, more insane season two finds The Boys on the run from the law, hunted by the Supes, and desperately trying to regroup and fight back against Vought.

Actress and producer Charlize Theron reflects on portraying over two decades of action heroes, from Æon Flux to The Old Guard’s Andromache, Mad Max: Fury Road’s Furiosa to Atomic Blonde’s Lorraine Broughton. In a lengthy retrospective Q&A moderated by IGN’s Terri Schwartz, Theron discusses the evolution of the modern female action hero, the roles that inspired her, and what drives her to constantly push her limits with fight training.

Who says staying home is boring? Archer, FXX’s award-winning animated comedy, returns for its 11th season later this year and follows Sterling Archer and his return to the spy world after a three-year coma. But first, join the voice cast of Aisha Tyler, Chris Parnell, Judy Greer, Amber Nash, and Lucky Yates, plus executive producer Casey Willis for a lively discussion and the reveal of not-to-be-missed details about the new season!

Be sure to drop in on this panel to hear from DC’s hottest talent about their latest works and how they’re making DC and The World’s Greatest Super Heroes the home for fans of great superhero storytelling worldwide! The creative talent behind some of DC’s most popular characters are on hand to give behind the scenes details on their stories and how they put their own unique voices to the heroes and villains that DC fans have come to know and love (and hate)! DC talent to appear includes Greg Capullo, Cecil Castellucci, Katana Collins, Kami Garcia, Jorge Jimenez, Daniel Warren Johnson, Dan Jurgens, Jim Lee, Sean Gordon Murphy, Bruno Redondo, Scott Snyder, James Tynion IV, and Brad Walker.

Cast members Seth MacFarlane, Alex Borstein, Mila Kunis, Seth Green, and executive producers Rich Appel, Alec Sulkin, and Kara Vallow from FOX’s hit animated comedy Family Guy celebrate 350 episodes with a virtual table read! After, they’ll take a look back at some of their favorite moments from the last 18 seasons, plus offer a special sneak peek at the hilarity and hi-jinx coming up in their 19th season premiering this fall on FOX!

Named “TV’s best comedy” by the Hollywood Reporter, What We Do in the Shadows is a documentary-style look into the lives of four vampires and their loyal familiar who, in a surprising twist, is a descendant of famed vampire slayer Van Helsing. Join us in raising a glass of regular human alcohol beer to the sharp-toothed cast–Matt Berry, Natasia Demetriou, Kayvan Novak, Mark Proksch, and Harvey Guillén–and the creative team for a spirited discussion hosted by special guest, Haley Joel Osment.

IGN interview with Wynonna Earp stars Tim Rozon and Kat Barrell about the final season of the fan-favorite Syfy series.

The star-studded voice cast of Hoops, a new adult animated series for Netflix launching this summer from 20th Century Fox Television (The Simpsons, Family Guy, Bob’s Burgers), gather for an irreverent-in-the-best-way conversation about coming together to make this show that follows a foul-mouthed high school basketball coach who is sure he’ll hit the big leagues if he can only turn his terrible team around. Voice stars Jake Johnson, Rob Riggle, Ron Funches, Natasha Leggero, Cleo King, and A.D. Miles join creator and executive producer Ben Hoffman and moderator/ guest voice star Max Greenfield (Johnson’s former New Girl co-star) for a truly wild and hilarious Q&A. Fans will be treated to an exclusive first look at footage from the premiere episode. Hoops comes from writer-comedian Ben Hoffman (The Late Late Show with James Corden, Archer), Phil Lord and Chris Miller (The Lego Movie), with animation produced by Bento Box (Bob’s Burgers).

For six seasons, The 100 have fought to survive against unimaginable odds. In the seventh and final season, these heroes are faced with obstacles that they’ve never before had to confront, including that of time. Pushed to their physical and emotional limits, they come to terms with decisions they have made throughout the years and find answers to questions not only about themselves but also about what it means to live–and not just survive. To find out what’s in store this final season and how their journey may end, join series stars Marie Avgeropoulos, Lindsey Morgan, Richard Harmon, Tasya Teles, Shannon Kook, JR Bourne, Shelby Flannery, and creator/executive producer Jason Rothenberg for their final Comic-Con appearance.

Looney Tunes Cartoons executive producer Pete Browngardt, supervising producer Alex Kirwan, art director Aaron Spurgeon, and voice cast members Eric Bauza, Bob Bergen, and Candi Milo come together for the looniest and liveliest panel you’ll find at Comic-Con@Home. Fans will be delighted as the panel exclusively premieres an all-new cartoon and takes you into the process of how they brought back Bugs, Daffy, Porky, and the other iconic Looney Tunes characters. Looney Tunes Cartoons is produced by Warner Bros. Animation and is now streaming on HBO Max.

For the complete schedule with all 34 Comic-Con@Home official panels and additional content being spotlighted, please visit: http://www.ign.com/articles/2020/07/16/comic-con-home-ign-live-schedule