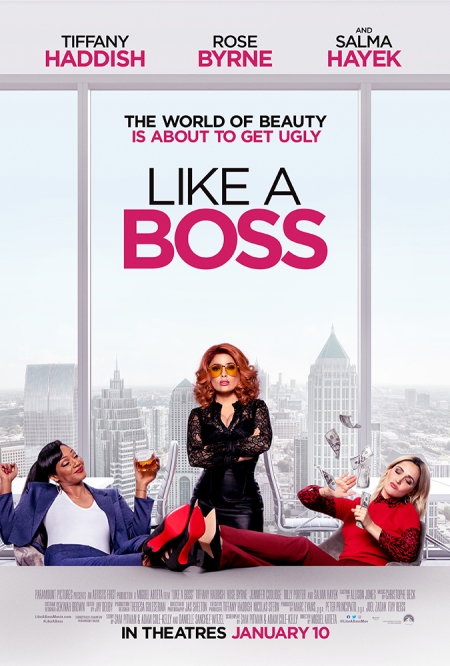 For those of you who are unaware, the first two months of the new year are reserved for films that usually are not good or that the studios have no faith in. In Hollywood, the unofficial name for January and February are “dump months.” Sure, there have been years where films defied expectations, February 1991’s Oscar Winning film Silence of the Lambs comes to mind, but most are forgettable or downright terrible.   Unfortunately, Like a Boss, which released during the second week of 2020, falls into the pile of forgettable films.

Rose Byrne and Tiffany Haddish play lifelong friends Mel Paige and Mia Carter, who are living the dream of operating their own small beauty business. Despite their differences in personality, Mel is the submissive and Mia is the dominant, they share the same idea makeup should not mask who women really are, but let the positive traits shine through. Unfortunately, their idealistic approach is not generating enough money to keep the business afloat. Enter Claire Luna, played by Salma Hayek, who is head of a major cosmetics company. Though she is rich, she also is evil, soulless, and everything that you would expect out of this type of character. While Mel is desperate to keep afloat, by severely pedestalizing Claire, Mia sees right through her. Soon after, Claire starts to make major changes to the company. Additionally, Mia and Mel remind her of a past friendship that went to the wayside due to her cutthroat nature. Other than ripping them off,  Claire also wants to prove that money and power will victor of loyalty.

The screenplay, by Sam Pitman and Adam Cole-Kelly, is a lot of set up with little pay off. The two leads try their hardest to pry something out of the many unfunny scenarios the script sets them up in. Unfortunately, they rarely succeed throughout the mere 80 minute run time. While many films, with double the length, can engross you with a well told story, this thing moves slow, and feels like it is throwing everything at the wall, hoping something will stick. The emotional beats are fine, but they are typical to a film like this one. If you have seen any film where the two leads are best friends, with conflicting ideologies, you can watch this movie with your eyes closed. Director Miguel Arteta also does not do any favors to the respected actresses that play around Bryne and Haddish. Hayek completely wipes out. Arteta feels that having her shout obscenities, with an accent, is enough to generate laughs. It is not, and it just comes off as irritating to listen to. The worst crime of all is how both Arteta and his screenwriters do Jennifer Coolidge dirty. Coolidge has a perfected the middle aged, overly sexual, and shallow character down to the T. Here, there is no control over the performance. It is all over the place in tone and comedic timing. It is the worst thing about the film, and that word should never be associated with the hilarious actress.

Byrne and Haddish do make some scenes where they make it all work. Their friendship does feel real and has genuine heart to it. Both their backstories do give the right amount of dramatic weight to influence the decisions their characters make throughout the film. Furthermore, their business model is a positive message that expresses that true beauty is skin deep. It is a message that is not anything new to storytelling, but it is handled in a believable and warm way.

Like a Boss is a forgettable comedy that is lazily directed and carelessly written. That said, it shows that even in depths of mediocrity, two caliber actresses, will shine a positive light onto any project.

I am giving Like a Boss a 2 out of 5 Hairpieces!

We’re checking out Alex Garland’s new @a24 flick #Men . Review coming soon 🎥 🍿 👀. #MovieReview #MenMovie
@lucky_prairie92 becomes a meme in the Multiverse of Madness and a lot more on Episode 139 of the 'Cinephellas Podcast.' We discuss @firestartermov, movie genre's that should return, ranking the @disneyplus series, and more! #CinephellasPodcast #Podcast #MovieReview #TVReview https://youtu.be/KMKOzthbQ0I
Every dog has its day. We're back to announce the next #PhellasGiveAway for the month of May. Check out the video to find out how you can enter to win the 'Dog' 4K Digital code. We'll announce the winner on May 24th.
The wild boys are back at it and recording episode 139 of the #CinephellasPodcast . The full video will be up later this week! #Podcast #MovieReview
My Tweets