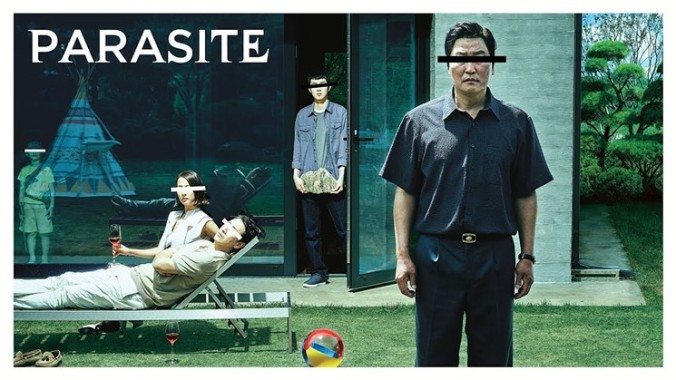 One of the perks of the Oscar film season, which we are currently in, is films from all around the world get their moment in the spotlight that are vying for the chance at the “Best Foreign Film” prize. You probably have a favorite film from this genre: Life is Beautiful, Roma, A Separation, War and Peace, and Crouching Tiger, Hidden Dragon. This film comes from South Korea.  Does it deserve to be mentioned amongst those other great films?

As we head towards the big ceremony, this film already has one of the most prestigious prizes under its belt. It won the “Palme d’Or,” which is rewarded to the top film at the world famous Cannes Film Festival. In director Joon-ho Bong’s film, our lead characters, calling them protagonists would be a disservice to the word, are unemployed con artists with little to no empathy. Kim Ki-taek, is a father who rejoices in his dishonest ways and teaching his children, Ki-Woo and Ki-jeong, everything that is immoral. His wife, Chung-sook, only adds on to this dishonesty. The tragedy is that both his children are extremely skilled in their own individual ways. Ki-jeong uses her graphic design skills to forge documents for her family. She forges academic documentation for her brother, who is posing as an English tutor for a rich family. This is where the devious fun starts as the family forces their way into this unsuspecting family’s home, as a driver, maid, and an art therapist. It is all fun and games until someone comes to the home, wanting to retrieve something from the basement. That is when the movie takes its dramatic and surprising turn.

What makes this film special is that it succeeds in each genre it dips its feet into. The first half of the film is incredibly clever and innovative. It acts as a caper like film, where you are seeing the villains pull a fast one on their prey. Bong’s direction here is fast paced with beautiful imagery shot of cinematographer Kyung –pyo Hong. Hong gives equal detail to both sides of this story. While the residence, where most of the film takes place, is clean, neat, and tidy, the slums, where are characters come from, is dirty and has a compact feeling. Hong’s camera work keeps up with the intensity of Bong’s direction. The family faces many challenges during the façade where each of them must play their part to the T. If one part of that machine isn’t up to par, the whole cover will be blown. At points, the camera moves in and out of each room with such grace and fluidness. It only adds to the thrill of this dangerous and immoral plan that these people have planned. Outside of the playfulness of the cinematography, Bong also is great at capturing the emotions of the characters. Even though the entire cast is ace, it is Kang-ho Song, who plays the con artist father, who is a revelation here. Despite his severe shortcomings, he creates a character that is sympathetic and represents the many who are handed a less than fortunate way of life.

As a piece of art, Parasite acts as a sociological commentary about the rich and the poor. In Bong’s world, the wealthy are naïve, foolish, and all their problems are ironed out by their money. Kim Ki-taek and his family fight to survive. In an early scene, instead of paying for proper fumigation, the family leaves the window open as the poisonous gas fills their basement apartment, while they are sitting in it. The wealthy employers are overly nice, trusting, and unsure of themselves. These qualities are looked down by Kim Ki-Taek and this family as much as the rich family has their moments where they look down upon the poor. Kim and his family may have infiltrated the home, but as the movie moves forward, especially when you find out what is in the basement, it starts to slowly sink in that they will never be truly part of that world.  Both families pretend in their own ways.  While Kim and his family play their parts in the con, the rich family pretends to care for people who are not in their rich bubble. At one point, after a devastating flood, that has a big impact on Kim and his family, the rich people throw a party of their son. Not caring about the effects of the flood on people like Kim, the rich throw money at them to mask their feelings of dread and hopelessness. The flood is symbolic of the divide between the two families. Bong perfectly uses this event to drive the point home that there will always be a separation of class in the world. What is beautiful to some, is tragic and life changing for others.

Parasite is indeed worthy of the accolades it has received. It is beautifully directed, marvelously acted, smartly scripted, and weaves through many genres easily. Most of all, it is a tale of the problems of the rich, poor, and the underlying theme of class. It truly is one of the best films of the year.

I am giving Parasite a 4.5 out of 5 Hairpieces!