It’s Day 2 of the Fantasia International Film Festival  and I started the evening with the Quebec Premiere of the Australian zombie comedy Little Monsters. It had its World Premiere at the Sundance Film Festival in their Midnight Program back in January. It then went on to play at SXSW and the Calgary Underground Film Festival. The film was written and directed by Abe Forsythe and stars Lupita Nyong’o, Alexander England, and Josh Gad.

If you haven’t heard about “Little Monsters” before today, here’s what it is about (copied from the Fantasia website):

“Dave is a deadbeat boyfriend, set on living his teenage dreams of making it as a musician, at the expense of every other aspect of his life. When he finds himself estranged from his friends and girlfriend, he has no choice but to fall back on his sister’s support. With her, he attempts, as best he can, to help care for his nephew. As he drives him to school, he meets his nephew’s teacher Miss Caroline and it’s love at first sight. He volunteers to chaperone a school trip with her and so they go, blissfully unaware their excursion will bring them, and a group of small children, right into the heart of a zombie outbreak.”

I know it’s early in the festival but Little Monsters is my favorite film yet. I had a really great time and laughed a bunch. The Fantasia crowd ate it up too! No, the film doesn’t reinvent the zombie movie wheel. Some characters’ story arcs are very typical but it’s fine. The zombies come from an expected source, but it’s not important. However, the story compensates with plenty of funny moments in form of dialogues or sight gags, including a few ideas I had never seen before. There are also some touching moments and under-the-belt humor. The pacing of the film is also pretty energetic, so it’s impossible to be bored.

I think zombie gore is not the main focus point here but there are some really nice zombie face makeups and a decent amount of blood and guts, although sometimes shown in quick cuts. 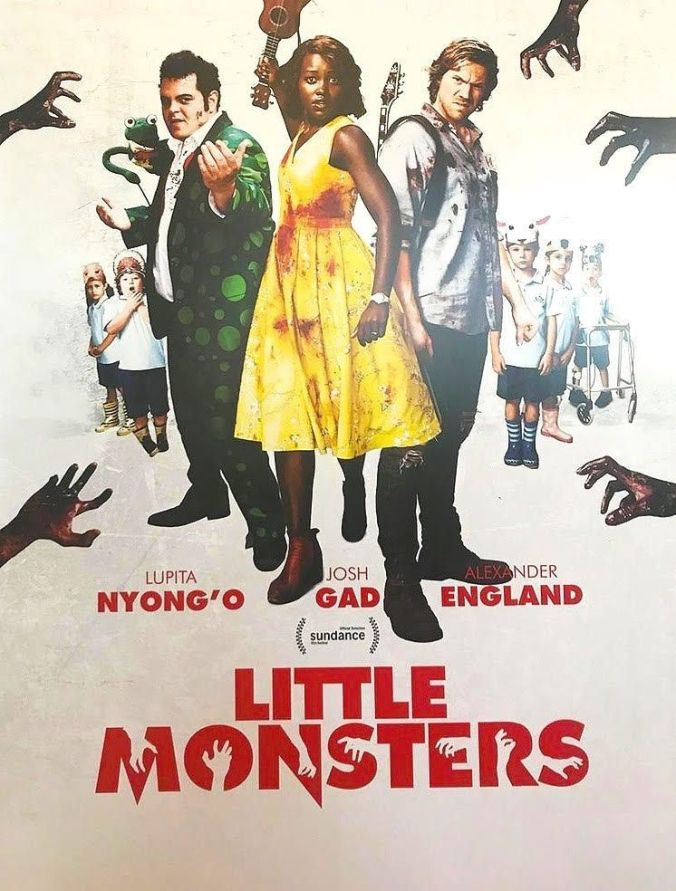 Lupita Nyong’o is definitely the sunshine of this movie. She’s charming and her smile irradiates the screen. She’s fully believable and caring as Miss Caroline, the kindergarten teacher. She also sings, plays the ukulele, and kicks some zombie ass. The origin story of her presence in Australia is hilarious. Alexander England is not an actor I’m familiar with but he does a great job here as Uncle David. Josh Gad plays Teddy McGiggle, a popular character from a children TV show. He’s great at being funny and physical with a character who’s pretty deranged. The cast of youngsters playing the kindergarten children is good too. Some of them provide solid comedy bits.

Back at Sundance, NEON and Hulu apparently co-signed a deal to distribute the film in the US, both in theater and on the platform. VVS Films, a Canadian distributor, provided the print for this screening. I guess we can expect more info on further distribution in the coming months.

I am giving Little Monsters a 4 out of 5 Hairpieces!

Video with the director Abe Forsythe from the Sundance Film Festival:

Sound is not extraordinary, but here’s a funny Q&A after the Sundance screening: