Recently, the world has gone Fyre Festival crazy due to the release of two documentaries on that very subject, courtesy of Netflix and Hulu. Because I want to write more reviews in the new year, I wanted to get out of my comfort zone and actually review a documentary (or in this case, two) for once and maybe more in the future. But I also wanted to write about these movies because this is a subject that speaks to me as a millennial and probably to many others like me. I mean, when I saw all those girls in bikinis and Ja Rule was going to be in this festival. I thought this is something I have to sell everything I own as this festival is going to be the thing that’s going to make our lives worth it, and nothing else will add up. Seriously, if I ever say those last few sentences genuinely, you’re legally allowed to give me a Stone Cold Stunner.

Basically, if you don’t know, Fyre Festival was supposed to be the music festival to end all festivals, resulting in a bunch of rich entitled idiots spent a depressing amount of money convinced they were going to see Ja Rule, Kendall Jenner, Bella Hadid, and Blink 182 via a series of “too good to be true” ads presented on social media. The latter three were among the numerous celebrities with common sense who ended up cancelling after seeing the incoming developments of the festival. A lot of the festival attendees ended up being stuck sleeping in desert tents and eating D-grade cheese sandwiches. Seeing how this both plays out in both documentaries makes this seem like a Lonely Island short film come to life, but it is all too true, and we as an audience get to laugh at so many people’s misfortunes. 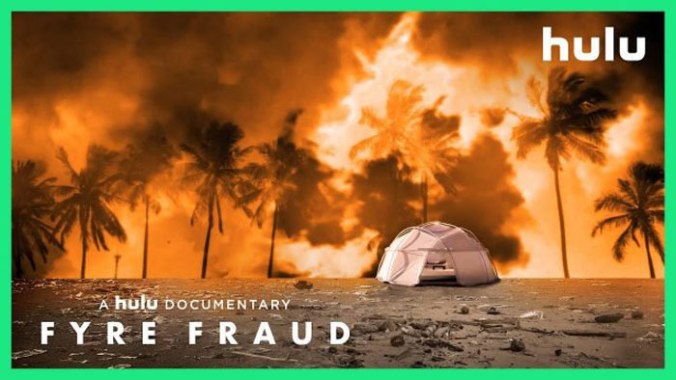 Hulu decided to surprise its subscribers with the release of Fyre Fraud, a fast paced and big dick energy-infused documentary on the making of the Fyre Festival. It also presents some backstory on the mastermind of the festival, Billy MacFarland. The subject of the movie might be the same as the Netflix version, but where this one has an edge is that they actually got an interview with MacFarland. Overall, I had more fun watching this over Netflix’s Fyre. The energetic tone set by directors Jenner Furst and Julia Willoughby Nason might seem jarring and annoying to others, but it weirdly fits to justify why so many people bought in this disaster in the first place. A lot of documentaries mean well, but sometimes they go so far up their ass in their pacing and feel that it becomes like a literal history lesson. As much as I want to be informed, I also want to be entertained or else, what are we here for? Fyre Fraud understands this and manages to find what’s already a compelling subject even more compelling. Even still, it does hit the typical notes that a lot of these documentaries do. It doesn’t go too much into detail over everything that occurred before, during, or after the festival but it tells us enough about the event that we need to know. For the most part, it focuses more on the notable bullet points that will make an audience react than on being a straight to the point, information based documentary. MacFarland doesn’t really have much to reveal other than what both documentaries won’t tell you second hand, but he is revealed to be a huckster right away. Something about him never feels real in any way that fits the demeanor and the personality of a used car salesman. But there’s something telling when the filmmakers try to get him to confront the mistakes that have occurred and MacFarland just brushes it off. Between the lines, his overall scumminess accidentally comes out, making for some entertainingly subtle moments in what is a movie with such a broad and energetic tone such as this. When it reaches the finish line, it has somewhat of a catharsis that will hopefully connect with the viewers. 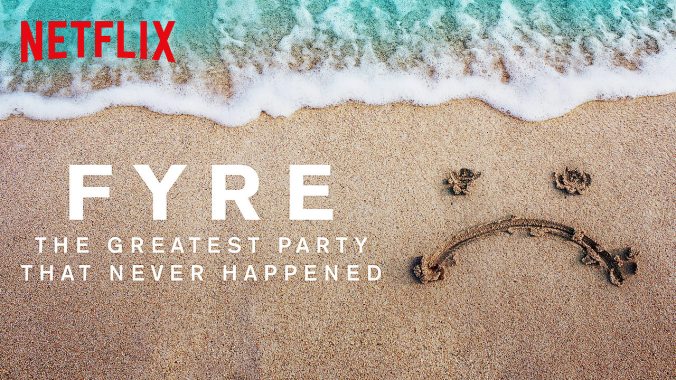 For those who want the Fyre Festival story to have more of a realness to its how it tells the story and a more strict detail on how it details its proceedings, Netflix’s Fyre might be the movie for you as most have touted it as the best of the two. I can understand why. I’ve debated it because I wasn’t sure as I didn’t think it had the immediate effect that Fyre Fraud had. Whereas Fyre Fraud feels like a juicy and delightful Bacon King from Burger King, Fyre feels more like a light and healthy green salad that won’t feel totally fulfilling, but it’ll end up doing more good for you in the long run. But what really sets this one apart is how surprisingly sympathetic it gets at times, in terms of how it affected the locals on the island who were expecting longer term employment and payment. As far as just making a living since Fyre Festival was expected to be a new annual festival that was going to be a revolution of sorts if the hype around it was to be believed. As a whole, it’s basically the kind of documentary I just said I didn’t want from this subject matter as I was worried that it would be too self important, but more often than not, this type of documentary filmmaking is effective like it is here. While the tone and the pacing is more reserved and deliberate than Fyre Fraud, it still has some worth.

Honestly, it’s probably more informative and in depth about how the festival was put together. I mean, sure, the fact Jerry Media, the company hired to promote the festival, produced this movie is a detail that makes one dubious about the movie’s intentions at the end of the movie. Even the crew at Jerry Media gets interviewed and they come off too much like victims. However, who can really say how culpable they were as they were just hired guns on a sinking ship? Well, I can. They were hired by someone to do a job to make their client look good and if they even sensed something (and I’m pretty sure it goes past that), then they should’ve been more vocal and active about it. Nobody’s this dumb if this is their whole job. Seriously, I’m supposed to think no one thought let’s just not be involved at any point. I know they say that they weren’t in on it, but it’s hard to really tell since they don’t even mention their involvement in the actual final product. Also, everyone involved in Jerry Media came off too good but I guess that’s just how these corporations work. Also, at the end of the day, it was still Billy’s idea and he does deserve a far harsher punishment that he ultimately gets. While the Hulu account was more entertaining and satisfying as a whole, Fyre will probably resonate more as it gets more into the nitty gritty of how the entire festival came together and all the people who suffered to get everything put together. You never really find sympathy with any of these people directly involved with the Fyre festival because they all come off too slick for their good. But it also helps that director Chris Smith never lets the participating parties off the hook and the behind the scenes footage used throughout makes everyone look more incriminating.

Ja Rule is shown to be even more of a presence at the festival. Whereas Fyre Fraud was more, “LOL Ja Rule is still a thing”, the most valid reaction to Ja Rule in 2018, Netflix isn’t afraid to show that he was probably just as responsible in the creation of the festival as Billy was. He also provides some of the best moments of the movie. His insistence to see pigs and his response to the entire Fyre team after the disaster has passed during a group conference call is so hilarious that it wouldn’t seem out of place in the deleted scenes of Popstar: Never Stop Never Stopping. Even as the most professionally made of the two, it has some crazy moments outside of Ja Rule’s appearances that come out of nowhere that make the slow build worth it. One moment that has been discussed and memed concerns a case of water that will confound many people watching this. But the numerous accounts presented here is also telling of how no one was in their element as the festival got more and more out of control months before the event even started. I think the main lesson to take away is that if Ja Rule is the face of your festival, then all hands should be on deck. The same should be said about the people would were dumb enough to pay for a concert just because an orange box told you to. Overall, It’s more reflective and informative on how the festival played out behind the scenes. While it lacks MacFarland actually being in the movie outside of archival footage, there’s more of a sympathetic look at the locals who worked on the events. You will leave feeling bad that they still haven’t gotten paid because they had no choice as they were just people just trying to earn a buck and weren’t affiliated with the actual festival other than they were happy to get some money, some extra exposure, and business to the island the festival resided in. It does a great job at presenting an autopsy on one of the biggest failures in social media and rich white people history.

Both Fyre Fraud and Fyre: The Greatest Party that Never Happened are worth watching for their own individual reasons. They do both overlap in certain aspects of how the events played out, but it’s still entertaining to see. Where one may lack in certain details, the other may shed some light on. If you’re even the tiniest bit curious about the Fyre Festival, these are highly recommended. You’ll get some laughs out of it and some catharsis seeing rich entitled white people get ripped off watching Fyre Fraud while being shaking your head and thinking,“Dude, I told you” while watching Fyre: The Greatest Party that Never Happened.

I’ll give both Fyre Fraud and Fyre: The Greatest Party that Never Happened a 4 out of 5 Hairpieces!