Tales of Halloween takes place in a little town that comes to life on Halloween night with ghouls, bullies, psychopaths, killers, and even aliens. Like most anthologies, some of the shorts are better than the rest. But a majority of these short segments really do capture the tone, spirit, and look of Halloween. Even if you do not participate in costumes, partying, bobbing for apples, and trick-or-treating, you may feel as if you have participated in these seasonal acts just by simply watching this film.

The first story is called “Sweet Tooth”, and it delivers everything a horror fan could ask for. It goes for the actual eerie tension and gore-heads will go gaga for the effects. The short is directed by The Hills Run Red director, Dave Parker, and it focuses on a kid deprived of candy and uses intestines as a way of harvesting his sweets. Another short titled “The Night Billy Raised Hell” offers some laughs and follows a young boy going on an ultra-violent goon-like rampage way of trick-or-treating. The short offers a surprise laugh-out-loud twist-ending for a turn. 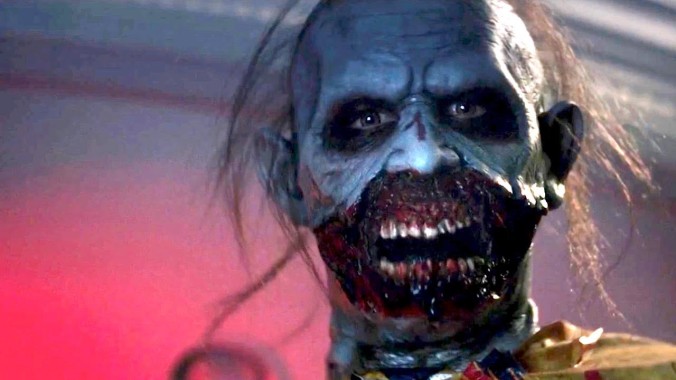 One of my personal favorite shorts featured The Walking Dead star, Pollyanna McIntosh, in “Ding Dong”. It’s directed by Lucky McKee (Director of 2002s May) and focuses on McIntosh as a childless mother luring children into her house and creating a nightmare for her husband. I enjoy McIntosh in movies like Filth and televisions The Walking Dead. However, after seeing her in this film as a woman becoming a demonic red-faced witch, McIntosh needs to find her way into more horror-themed projects. McIntosh isn’t a stranger to the horror genre. She’s been in the 2009 horror film Offspring and the 2011 sequel The Woman. She hasn’t done much horror since, but if she has the performance as she did in this film mixed with her bloody character like from The Woman, then she could easily be a female horror actress icon. In Tales of Halloween she’s juvenile, hair-raising, a little cartoony, and this is a standout performance amongst the other actors and actresses. This is my favorite performance from her so far.

Tales of Halloween will also have a few familiar faces to those who love the horror genre. Director of An American Werewolf in London John Landis, Gremlins director Joe Dante, and Insidious’ Lin Shaye, just to name a few who pop up in this flick. Adrienne Barbeau’s role in this film is an homage to the same radio host role she played in John Carpenter’s 1980 movie, The Fog.  Speaking of Carpenter, even one of the trick-or-treating kids is dressed up as Carpenter’s Snake Plissken, from his Escape from New York and Escape from L.A. films. Horror fans will have a blast trying to dissect this film for all the cameo’s, references, Easter eggs, and homages in each segment.

Director of The Descent, Neil Marshall, tackles a story about killer jack o’ lanterns seeking revenge on humans. The sound design of the carving pumpkins and squishy pumpkin guts is masterful. I usually don’t discuss sound effects in film, but the sound here really adds to the atmosphere. The jack o’ lanterns eat the heads off of people and the battle the police have with the pumpkins makes for a fun laugh. This segment also references Silver Shamrock from Halloween III: Season of the Witch, another reference horror fans might appreciate.

With so many fun and well-crafted segments, some are obviously stronger than others. “Grim Grinning Ghost” is not only the shortest segment but very mediocre, especially when it’s followed up by “Ding Dong”. “Grim Grinning Ghost” has a stunning creepy, chilling atmosphere and visuals. When it comes to visuals, “Grim Grinning Ghost” is the films main standout. However, I found the reveal of the urban legend to be a little disappointing. “Friday the 31st” is playful, but when compared to the other stories it seems to be lacking a clear direction. That doesn’t mean they’re bad, because they are not, they’re just mediocre to okay when compared to the other ones.

Even with some gore, dark tension, and subject matter, Tales of Halloween has a playful tone. It’s definitely worth a repeat viewing and much like Trick ’r Treat, it’s a Halloween themed anthology film that is worthy of a tradition of watching. I believe Tales of Halloween earns…