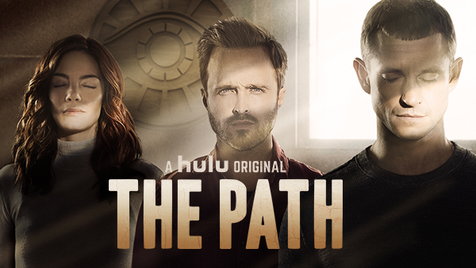 Hulu’s The Path, is the newest show from Jason Kitims (Fright Night Lights) and Jessica Goldberg (Parenthood). This show tackles a cult in upstate New York and raises a few questions early on:

Do you believe? Do you follow the path of some sort of religious outlet that makes you the person that you are today?

The Path follows the same layout of it’s show-runners predecessors, a small community with a family that is more broken within than meets the eye. Eddie (Aaron Paul), Laura (Michelle Monaghan, and Cal (Hugh Dancy) are the main seekers behind the manipulative Meyerism, and directing followers to climb the ladder and find the light. The first two episodes bring you into the Meyerism compound which reminds me a lot of Alexandria (TWD), where the small knit community are following daily chores and keeping up with their part of the bargain, giving back to Meyerism. Eddie has a rougher past compared to his family, a broken childhood and family that led him to self destruction and coming across a Meyerism book in the most vulnerable of times. As he was guided to the community, he found Laura (born into the cult) and started a family of their own within the compound walls. Cal is the main power behind the Meyerism movement and has built this community to what it is today, religious or not, it seems safe. It may come off as a scientology resort, but it’s own entity, of fabricated illuminatism (hence their eye symbol that is pasted all over the commune).

Their use of manipulation to bring outside visitors into Meyerism is quite intriguing on the surface and never lets the audience go in the first two episodes. Cal is like a villainous evangelist “the guardian of the light” that is portrayed as a man with a vision and will do anything it takes to bring people to the “light.” At the end of episode 1, Cal takes matters into his own hands, and attacks an abusive father to prove a point that if you live a destructive life, you will eventually need to repent and climb the ladder for forgiveness.  Laura is Cal’s old love interest and creates an awkward love triangle between Eddie, Cal, and Laura throughout the first episode. The other townsfolk, present humanism by displaying acts of kindness through helping drug addicts and tornado victims out.

The Path is sometimes questionable depending on which character it focuses on, but the overall message is contradictory to it’s true meaning. By relying on the beliefs behind Meyerism, temptation, and power outweigh the true meaning of finding the light.  Cal is proof of this by pushing his way to the top and getting rid of the hippy values put into place many years ago by Laura’s father. Laura was born into the movement and is all she knows, even when her husband Eddie gives her insight on the world around them. Aaron Paul’s role as Eddie is my favorite of the show because it shows what he is capable of as an actor, and shies away from the Breaking Bad character he is known for.  Paul dives deep into this character and hits a darker place far into the subconscious. Eddie is broken and traumatized from his Peru mission and has flashbacks of seeing his dead brother while under a drug induced trip. He seems to be the only character that is steering away from the Path that everyone has chosen and been brainwashed with.  As the show develops in the first two episodes, The Path dives into touchy subjects; cult, religion, and faith. The main characters are all appealing, but their past and involvement with Meyerism paints a picture of what it’s like to be blinded by their own faith.

This show has been captivating and makes me want want more. By introducing such delicate subjects that are always so quietly hushed away on TV, The Path brings something new and refreshing to entertainment. In a destructive world influenced by greed and violence, there are communities out there that find something to believe in and not let the outside world interfere with what they think is right.  We all have inner demons that we overcome each day, but the actual evil is all around us, waiting to take us down.  We all choose paths to find answers, but what is at the end of the tunnel may not be what we had anticipated. Whatever way you look at this show, from the spiritual aspect, or just another cult tucked away in the cracks of the universe, it brings an interesting perspective to a group of people and their fates.